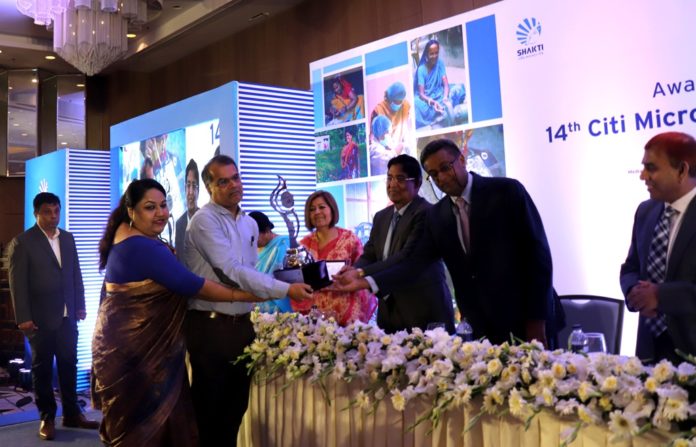 Dhaka. 29 September, 2019. COAST Trust is awarded as the Best Innovative NGO 2018 in the 14th Citi Microentrepreneurship Awards held today at the Hotel Intercontinental, Dhaka. The award giving ceremony was jointly organized by the Citi Foundation of New York and Shakti Foundation along with The Daily Star and Channel-i as the media partner and CDF as strategic partner. Citi Foundation is a New York based global financial institution that promotes innovative interventions in microfinance.
The event was presided by Ms. Rokia Afzal Rahman, former adviser of Caretaker Government of Bangladesh while Dr. Mohammad Abdur Razzaque MP, the Honorable Minister of Agriculture of the Government of Bangladesh was present as the chief guest. Mr. N Raja Shekaran (Shekhar), the Managing Director and Country Officer of Citibank NA, Bangladesh and Dr. Humaira Islam, founder and Executive Director of Shakti Foundation were also present as the special guests. Mr. Abdul Awal, Executive Director of CDF and Rezaul Karim Chowdhury, Executive Director of COAST Trust spoke at the occasion.
The Chief guest handed over the Award of the Best Innovative NGO 2018 to Begum Shamsun Nahar, Chairperson of COAST Trust and Mr. Rezaul Karim Chowdhury of COAST Trust. The organization is awarded this prestigious reward for the integration of Right Based Approach (RBA) in microfinance in the coastal area of Bangladesh. According to COAST intervention, microfinance is not a mere financial program for the poor and that’s why it integrated sustainable agriculture, promoting livestock and fisheries along with primary healthcare, Community Radio, disaster management through People’s Organization. Channel-i made a documentary film on the achievements of COAST and displayed in the event. Citi Foundation of New York has been giving this award since 2005 to recognize the innovative microfinance, women and youth entrepreneurs.
Rezaul Karim Chowdhury in his speech expressed his gratitude to PKSF (Palli Karma Sahayak Foundation) and other commercial banks and development partners for coming forward to finance COAST. He said, COAST is working in the coastal areas for the empowerment of poor by institution building through People’s Organization and Right Based Approach.
Mr. Abdul Awal, Executive Director of CDF, said, commercial banks should leverage more for the agricultural loans with single-digit interest rate.
Mr.N. Raja Shekaran (Shekhar) said, Citi Foundation works to promote economic progress and improve the lives of people in low-income communities around the world. He thanked the Shakti Foundation for involvement in the process in Bangladesh.
In the speech of the chief guest, Honorable Minister Dr. Abdur Razzaque said, the Micro Finance Institutions (MFIs) are playing a vital role for poverty alleviation. I urge the MFIs to contribute to the social development of poor.
Please download press release [English]
Photos