Dhaka, 25th August 2018. Today a group of civil society right activists led by CCNF (Cox’s Bazar CSO and NGO Forum) and COAST Trust organized a human chain in front of National Press Club, Dhaka on the eve of the anniversary of 25th August 2017 Rohingya influx in Bangladesh titled “Myanmar Junta must be held accountable for Rohingya genocide and Ensure transparency and accounts of all relief fund”. The human chain rally is moderated by Mostafa Kamal Akhanda of COAST. Other speakers are Badrul Alam and Zayed Iqbal Khan of Bangladesh Krishok Federation, Subol Sarkar Bangladesh Bhumihin Samity, Barkat Ullah Maruf of COAST and Rezaul Karim Chowhdury of CCNF and COAST.
On behalf of the group Barkat Ullah Maruf of COAST explains the position paper and places five point demands as follows; (i) Myanmar junta must be brought to the International Criminal Court for justice, otherwise such ethnic cleansing and genocide like Rwanda will occur again and again in the history. (ii) UN agencies and INGOs (International non-government organization) must emphasize the justice rather than providing relief. Specially India, China and Russia must play an effective role in this regard. (iii) Rohingya refugees have the right for Human Dignity as they will be living here for longer time. At any cost present approach of sheltering in the camp area have to be changed for their human dignity, education and other rights. The Whole of Society Approach (WOSA) must be followed in addressing the refugee issue, (iv) Relief should not be a business for some national and international agencies. So, all agencies must publish their relief accounts with transparency of how much they spent for input, operation and management cost. All these accounts must be examined by public audit. (v) Bangladesh should strengthen its diplomatic effort and take multilateral approach rather than the bilateral one so that Myanmar is able to dilly-dally and hypocritical approach.
Badrul Alam of Bangladesh Krishok Federation said, the Rohingya refugee issue is a one the imposed problem on Bangladesh like climate change one, where Bangladesh is an innocent victim.
Mostafa Kamal Akanda of COAST said that the global interest on Rohingya issues is fading away and one day the INGOs and UN agencies will be fled away. Bangladesh government will be remaining alone to take responsibilities. So, from now on, Bangladesh government should take full accounts of UN agencies and INGOs with full public transparency.
Subol Sarkar of Bhumihin Somity said that, UN agencies and INGOs spend money in a lavish way. We do not need around 1,500 expatriates for this Rohingya response.
Rezaul Karim Chowdhury of CCNF and COAST said that, Bangladesh is respectful to the human right and this is why our Honorable Prime Minister opened the boarder for the Rohingya refugees. We are proud for that. But it should not be considered as our weakness. we have billion-dollar business with India, China and Russia. Especially with India and Russia we have proven relation since they have helped us during our liberation war in 1971. They should leverage with sincere efforts to put pressure on Myanmar government to take back the Rohingyas with dignity. They must give Bangladesh a space to take a breath to develop from a least developed to a middle income country.
Please download related paper [Bangla Press] [English Press] [Position Paper]

News link of Voice of America 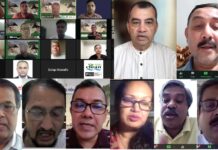 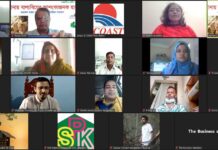 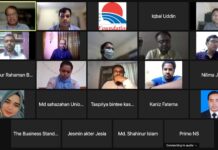