Dhaka, 14th June 2019. Yesterday, 13 June 2019, the Daily Samakal organized a roundtable title called “Human Dignity to Rohingya People: Bangladesh Perspective” in cooperation with COAST, an NGO working in Cox’s Bazar, and sponsored by UNHCR, the UN Refugee Agency. The roundtable was held in the Hotel Westin, Gulshan. The roundtable was moderated by Mr. Mustafiz Shafi, Acting Editor of the Daily Samakal and Mr Rezaul Karim Chowdhury, the Executive Director of COAST.
The country’s leading human rights and civil society activists, including Mr Syed Abul Maksud, Ms. Shirin Haque, Barrister Manzoor Hasan, Mr Nayeem Gowhar Warha and Mr Asif Munier spoke at the occasion alongside Mr Mohammed Abul Kalam NDC Additional Secretary and Refugee Relief and Repatriation Commissioner, Mr Steven Corliss, UNHCR Bangladesh Representative, and Mr Abu Morshed Chowdhury President of Cox’s Bazar Chamber of Commerce and Industry. Mr. Mujibul Hague Munir of COAST presented the key note questions to the participants.
In the course of the discussions, speakers suggested alternatives to the current response, including multi-year planning for the response, while repatriation continued to be delayed and the crisis became more protracted. They also urged for ensuring continued human dignity of the Rohingya by allowing them more formal education and engaging the Rohingya people so they can engage meaningful and productive activities and do not become idle.
All the speakers, especially Mr. Mohammed Abul Kalam, rejected the prevailing negative perceptions of Rohingyas. In his experience of dealing with this crisis from the start, he said that they are normal, religious, law abiding people, but they have been the victims of atrocities and negative propaganda systematically propagated by the Myanmar regime. He said it was important we speak about the situation accurately and based on facts. Mr. Steven Corliss, the UNHCR Country Representative said that root cause of Rohingya refugee’s displacement and the solutions to this crisis lies in Myanmar. He also noted the exceptionally generous response of the Bangladeshi people and suggested we needed to keep a distinct focus on supporting affected host communities to ensure peaceful social cohesion as the response continues. Mr. Sayed Abul Maksud, renowned Ghandian and Columnist, urged us to keep the human spirit that the nation and our Honorable Prime Minister has shown in opening our boarder. He noted that it is our national responsibility to keep the spirit.
Ms Shirin Haque of Narripakkha said that Rohingya children and adolescents should be provided higher education and Rohingya women, critical to their futures. They could be give health care training and be engaged in productive work, so that they are less likely fall prey to traffickers and religious fanatics. Barrister Manzoor Hasan of BRAC University pleaded for Rohingya people’s voice in the decision making. He also urged for education and productive technical education to the Rohingya youths, who constitute more than half of the refugee population. Mr. Abu Morshed Chodhury President Cox’s Bazar Chamber of Commerce and Industry said that the Rohingya population should be considered as being able to contribute to the market and as a productive force and as potential to boost Cox’s Bazar economy.
Mr. Julfikar Ali Manik of New York Times and Boishakhi TV and a long-term researcher on the Rohingya issue said that government must learn from the past and should have a long-term plan for the situation. Mr. Asif Munier, the Refugee and Migration expert said that, Bhasan Char or other similar projects will not solve the problems, as it is a protracted crisis, and the government must prepare multiyear planning needed for a comprehensive response. Mr Nayeem Gowhar Warha of Disaster Forum said that, government must consider track two diplomacy engaging civil societies, and for a possible third country options, including through labor migration opportunities and resettlement. Ms. Sheuly Sharma of Jago Nari Sangsta of Coxsabzar said that Rohingya women is desperate to see their future, which can lure them toward traffickers. Mr Mustafiz Shafi of Samakal said that, as a nation we should be united on the issue and we need to keep up our spirit that Bangladesh is a humanitarian state.
Please download [Bangla Press] [English Press]
Photos 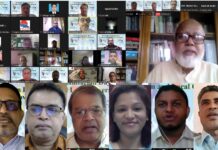