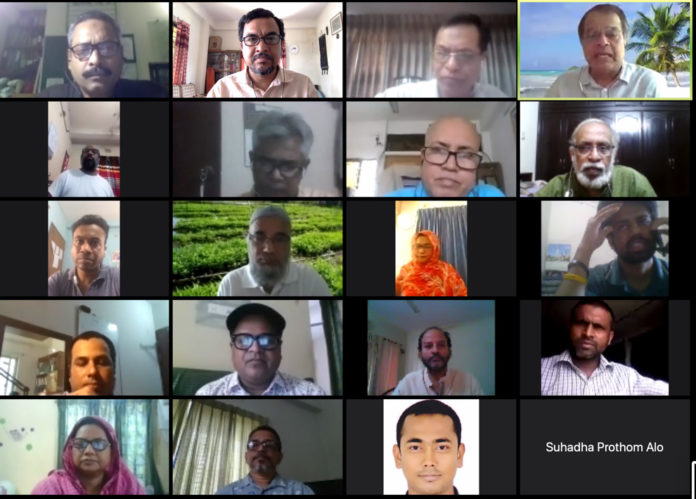 Mr Abdul Latif Khan in his presentation said that NGOs has spent taka 1.56 billion, where 10% (0.15 billion) is from their own resource, mainly by the local NGOs as the fast responder. Among them 56% are non-micro finance NGOs and the rest are right based NGOs. They provided the support in 49 districts of 8 divisions through 212 national and local NGOs. Most of the support covered in Rangpur, Rajshahi, Chottogram, Khulna and Dhaka division. Major NGOs concentration is seen in Khulna division. Most of the support is given as awareness, second highest support is food, then health and then cash. Soap and hand wash support is at the top of the chart followed by emergency food items, mask, awareness leaflet, and PPE (Personal Protective Equipment). The major recommendations raised in the presentation is inclusive coordination and direct funding to local and national NGOs.

Rezaul Karim Chowdhury of BDCSOprocess said, this is the process to highlight local and national NGOs as the fast responders even without donor support initially.

Dr Ehsanur of NAHAB said, since the NGO response at local level is a continuous process, we shall keep updating on their efforts.

Nayeem Gowhar Wahra of Disaster Forum urged for strong coordination between local government and NGOs especially at the district level with a long term planning, which requires coordination space for NGOs.

Abu Morshed Chowdhury of CCNF said, Donors should give direct funding to local and national NGOs for implementation while the key role of INGOs (international NGOs) and UN agencies should be monitoring and technical assistance. They should fulfil their commitments on localization, he added.

Hasina Akhter Mita of NIRAPAD said that NGOs are the best to reach remote areas and marginalized population.

Bimol Dey Sarker of CCNF elaborated how local NGOs in Cox’s Bazar supported relief, health and awareness activities from their own fund both in refugee camps and host community, especially funding to Deputy Commissioner’s initiatives.

Jashim Uddin of ADAB said, the government must understand the benefit of the involvement of NGOs and local government as the impact of corona is long term and multifaceted. The new budget should reflect the plan of mass people’s health in future, he added.

Rafiqul Islam of FNB said that, government should not go alone, health sector should get highest priority in our planning.