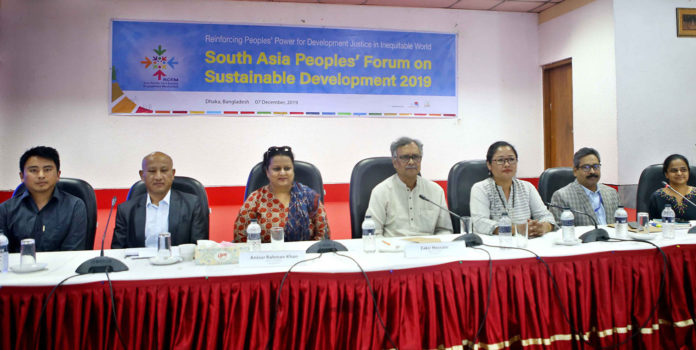 Dhaka, 8 December 2019: Diversified CSO (Civil Society Organizations) met in a dialogue in Dhaka on 7th December 2019 prior to the Third South Asian Forum on SDG to be held in Bangladesh and raised issues to complement the government positions. CSO representatives said SDG should be well understood first by the people as well as by the business community and the political leaders, otherwise the goals will be difficult to achieve.
The dialogue was jointly organized by Asia Pacific Regional CSO Engagement Mechanism (AP-RCEM) and COAST Trust at the CIRDAP auditorium where CSO representatives from India, Nepal, Bhutan, Sri Lanka and Bangladesh participated. Due to the visa issues some participants from Afghanistan and Pakistan couldn’t participate. Mr. Chrispin Petro Kapinga, Social Affairs Officer, UN-ESCAP South and South-West Asia Office of New Delhi was also present as the guest in the dialogue.
On behalf of AP-RCEM Mr. Daya Sagar Shrestha of National Campaign for Sustainable Development Nepal said in his inaugural speech, the commitments of governments and international institutions on peace, human rights, governance and development should be immediately fulfilled to achieve the SDG.
In his speech Mr. Chrispin Petro Kapinga of UN-ESCAP said, UN is always facilitating the LDCs to build their capacities in order to achieve the 2030 development agendas and goals.
Rezaul Karim Chowdhury, Executive Director of COAST said, CSO in Bangladesh and in many under developed countries are very important actors of achieving the SD goals and popularizing the issues at national levels and it should be recognized by the governments.
Ms. Beena Pallical from Asia Dalit Rights Forum, India said in her speech that it is always said ‘no one will be left behind’ but the reality is agenda of people with disabilities, ethnic minorities, women and dalit communities are always forgotten.
Ms. Chandima Priyeshni Arambepola, Centre for Poverty Analysis, Sri Lanka said, we need to build regional cooperation not only by the governments but also by the CSOs to address the real issues, needs and challenges of the development rather than to give priority to mega-infrastructure projects.
Ferdous Ara Rumee of COAST Trust said, there is a lack of women participation in Bangladesh as well as other countries in South Asia in the DRR when women are the most affected by the disasters.
Photos

Attackers on Female NGO Workers in Teknaf Must Face Exemplary Punishment. CCNF issues ultimatum: Member NGOs will not work in Hnila if no punitive...