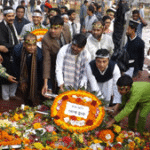 Martyrs Day and International Mother Language Day. This is to pay our respects to those who had laid down their lives protesting the imposition of Urdu as the only language of Pakistan.

The officials of Principal Office joined the vast concourse of people in the Central Shahid Minar in Dhaka to offer their oblation on the mound of martyrs.

COAST family also organize rallies with singing patriotic songs in the district level on the same day and same time to place their wreaths on the local monuments commemorating the immolation for upholding Bangla as the state language on the 21st February in 1952.

COAST trust brings out a uniformed banner this year saying 21st means Equity and Justice for all. COAST works for the poor and disadvantaged people in the coastal area who are more exposed to different kind of risks and vulnerabilities than the other parts of the country. COAST work for social transformation in the respective areas and believes in the spirit of International Mother’s Language Day to be complied with the vision and mission of the organization.