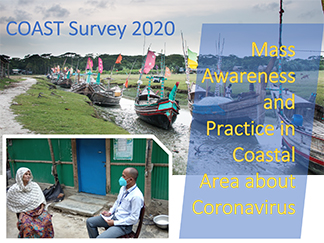 Dhaka, 23 April 2020: COAST Trust, a non-government organization working in the coastal area of Bangladesh conducted COVID-19 Awareness and Practice Survey 2020. They survey showed 49% of the responders have no clear idea on the primary protective measures against the Coronavirus. 74% said they don’t know what is IEDCR and its service. COAST Trust has taken initiative to raise awareness by own fund.

Monitoring and Research department of COAST Trust conducted this survey among the lower wage earners in Cox’s Bazar and Bhola district through Random Selection Method. Mr. Rezaul Karim Chowdhury, Executive Director of COAST said that the organization conducted this survey to know how the poor people of coastal area are fighting against this completely unknown disaster. He added, COAST’s mandate is to develop the socio-economic status of the vulnerable and disadvantaged people of the coastal area.

Monitoring and Research department of COAST said, the basic objective of the survey was to assess the primary knowledge of the coastal poor and how they are complying with the health directives.

47% of the responders of the survey were women and 53% were men. 80% of the women responders were housewives and the rest included students, dropped out adolescents and elderlies. 10% of the responders were farmer, 18% labor, 19% small entrepreneurs and 13% fishers. Rohingya refugee affected Cox’s Bazar and Island district Bhola are selected for this survey while two small islands in the Bay of Bengal Kutubdia and Char Motahar of Bhola are also included.

COVID-19 basically spreads through touches and that’s why WHO prescribed to stress on hand wash and all the awareness messages highlighted on hand wash and its process. Despite of the massive awareness across the country it is found that 49% of the responders don’t know the basic rules of hand washing. 43% said they are not able to follow those rules for different reasons including less availability of soaps all the time.

26% of the responders have misconception on how the virus spreads. 53% of them are not fully aware of the primary symptoms of a COVID19 positive person. When asked about the sneezing and coughing etiquette, 64% mentioned about using tissue, napkin or elbow. The rest 36% said they had no idea about it.

Almost all of the housewives said that they didn’t directly have the access to information on COVID19. They had to depend on the family members who go outside.

The survey showed, it is hardly possible for the lower wage earners to stay at home. 37% responders said they go to the market once in a week or longer time. The rest 63% of responders go to the market every two or three days for buying food. 24% of them have no idea about social distancing.

66% responders said that the number of devotees in the mosque is reduced to avoid the COVID-19 infection. 28% said the mosques in their area are following the government health directives. 56% responders don’t know about ‘Home Quarantine’ or have misconception about it. 13% don’t know why one should use mask.

By analyzing the survey findings, Monitoring and Research department of COAST said, a normal mask available in the market of those areas costs 30 to 40 Taka which is hardly affordable for a lower income person. The small entrepreneurs have to go to the market every day for selling their products. They desperately need finance which is not available now since the microfinance operation is closed.