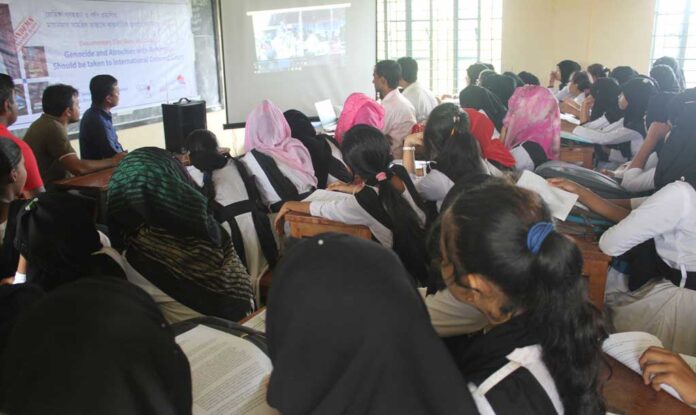 COAST Trust continued to exhibit 3 documentary films made on the genocide, rape and atrocities with Rohingya Community in Myanmar by the Army Junta. They forced nearly one million of Rohingya to flee their homeland and become refugee in Bangladesh.

COAST Trust organised this documentary film show at Ukhiya College on 6th June and Teknaf High School on 7th June, where mostly the students participated. COAST thought the students and the youth are the main force to build a social harmony in the area as the host community have been suffering a massive impact of hosting this huge number of refugees. The host community needs to understand this one million people were forced to cross the border. They are not responsible for the created stress for the host community of Ukhia and Teknaf.

Another important objective of organising this film show was to campaign with the government to take initiative to submit their observations about the Rohingya in the International Criminal Court (ICC) by 11 June 2018. The host community are the most affected to put pressure on the government to blame the Myanmar Junta for this as well as inviting the international community to hold the Junta accountable for this massive genocide.

Moqbul Ahmed, Assistant Director of COAST Trust explained the objectives of the film show to the audience while Normal Paul and Tauhidul Alam facilitated the film show for the students. In response, the students said, by watching the documentary films, they are now convinced that the Myanmar Junta is the responsible for the genocide, rape and atrocities. If they are not brought to justice, it will be the defeat of entire humanity. Because, as a human being we can not be silent on this issue, the students said.

Before this, local event, the films are also exhibited in Cox’s Bazar at Hotel Uni Resort on 29 May 2018 and at the University of Dhaka at TSC on 31st May 2018. The same demands are raised from those events.