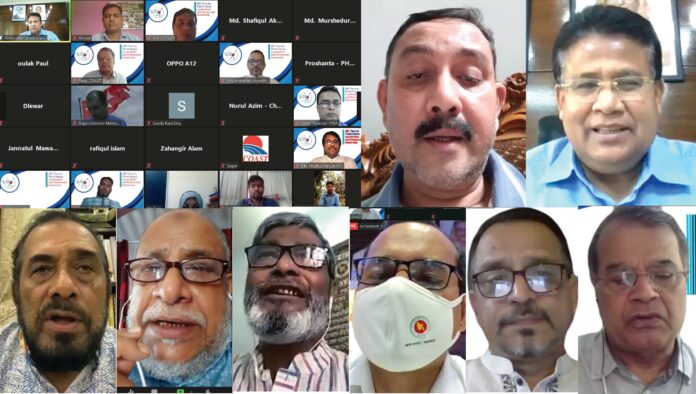 Dhaka 6 May 2021: The active participation of the locals in the planning and implementation of the Rohingya response is essential to make it sustainable. In addition, Local government institutions and local NGOs should take lead in implementing the Rohingya program at the field level, since it will reduce the operating cost and the Rohingyas can get more direct assistance. The speakers said these at a webinar titled “Rohingya Response Plan 2021, Is It Going Beyond or A Business As Usual: Time to Think Future: Localization and Democratic Ownership” organized by Cox’s Bazar CSO-NGO Forum. The seminar was moderated by Mr. Rezaul Karim Chowdhury and Abu Morshed Chowdhury, Co-Chairs of the forum of 50 local and national NGOs working in Cox’s Bazar.

Presenting the keynote of the event. Mr. Mujibul Haque Munir of COAST Trust said that, from 2017 to October 2020, on average $428 received for each Rohingya family per month, according to our observation each family received direct support of $ 130 which includes the cost for food and non-food items, shelter logistics. We want to know, how much for other services and how much for Education, protection, health, etc. and much for operation and management cost? We demand transparency in this regard. The impact of the Rohingya crisis is long-term, so long-term plans need to be adopted to address the Rohingya crisis, not short-term. No initiative will be sustainable without the participation of the locals in the adoption and implementation of the plan. He made several specific recommendations, such as there should be a single authority for Rohingya management, two-story shelters on a priority basis, and all organizations involved in the Rohingya program should publish plans to restore the environment in Cox’s Bazar.

Mr. Ashik Ullah Rafiq MP said, the Rohingya response needs to identify necessity and a luxury, and wastage of funds must be protected. The government has several mega projects for the development of Cox’s Bazar, but the Rohingya crisis poses a threat to overall socio-economic development. The international community, including the United Nations, must now focus on forcing Myanmar to repatriate the Rohingya.

Senior Secretary Md. Helaluddin Ahmed said that in the current situation in Myanmar, it seems that the Rohingya repatriation crisis will be longer, so the suffering of the local people in Cox’s Bazar is being prolonged. Therefore, the opinion-participation of the locals should be given priority in taking action to deal with the crisis. Deputy Commissioner Mamunur Rashid said there is no alternative to have better coordination among all concerned in the effective implementation of Rohingya programs.

Advocate Sirajul Mostafa said the lack of coordination in Rohingya management is obvious. The local people have been severely affected by sheltering the Rohingyas, but they are not being consulted on various programs. Advocate Faridul Islam said that when the Rohingyas came to Cox’s Bazar, the local people, as well as the local NGOs, jumped on their own initiative, so the field level activities have to be led by the local NGOs as they are accountable to the locals. Hamidul Haque Chowdhury said there should be strong aid transparency. How much money has been raised by international NGOs including the United Nations and in which sector it has been spent should be made clear. All plans must be based on the views of local people’s representatives.

Mr. Gawher Nayeem Wahra of Disaster Forum said various food items needed for the Rohingya camp should be procured from Cox’s Bazar. For example, if salt, dried fruits, etc. are procured from Cox’s Bazar without importing from outside, it can play an important role in the economy of Cox’s Bazar. Refugee expert Asif Munier said those coming from abroad to work on the Rohingya program need to transfer technology and skills among locals. Oxfam’s Country Director Dipankar Datta said localization has been ensured in many other activities in Bangladesh, so it is possible in Rohingya management as well. Rajan Ghimire, Country Director of Malteser International, said the JRP could not present an overall picture of Rohingya management, but the overall picture of funding and programs needed to come to the JRP. Professor of BRAC University teacher Barrister Manzur said the localization roadmap report was submitted about a year ago, it should be published.

Rajapalang Union Parishad Chairman Jahangir Kabir Chowdhury said the locals were supposed to spend 25% of the total allocation, but the reality is far from over. Hnila Union Parishad Chairman Rashed Mohammad Ali said a monitoring team comprising local people’s representatives should be formed to check whether the money coming under the JRP is being used properly and whether 25% of the total fund is being used for the locals.

YPSA Chief Executive Mohammad Arifur Rahman said, ‘Localization is not a matter of kindness, it is our right. This moral right is recognized in the light of various international treaties. UN agencies have a huge operation cost, but they don’t want to pay any overhead costs to local NGOs. It shouldn’t be. Bimal Dey Sarkar, Chief Executive of Mukti Cox’s Bazar, said JRP 2021 has completely avoided localization. The localization roadmap should be published immediately and its recommendations should be implemented. Abul Kashem of Help Cox’s Bazar said that when local NGOs talk about transparency and accountability, there is a tendency among international organizations to avoid them in various ways.

Rezaul Karim Chowdhury, Executive Director of the COAST Trust, said ISCG and the United Nations must adhere to the IASC policy in managing Rohingya in Bangladesh. ISCG should not become a parallel body of the government, it has to act as a counterpart of the government.

Necessary glossaries both in English and Bangla