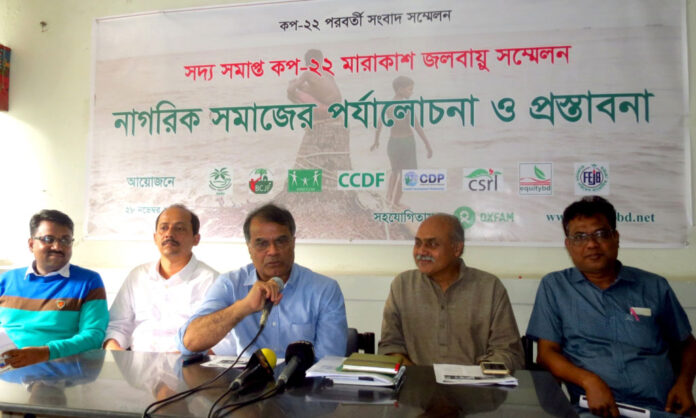 Dhaka, 28th November 2016. A group of Rights Based Civil Society Networks has expressed their deep concern and frustration over the outcome of the recently held CoP22, Marrakech Climate Conference, since this conference has been failed to fulfill needs and demands of the Least Development Courtiers (LVC) and Most Vulnerable Countries (MVC). The roadmap of the implementation of the Paris Climate Agreement was supposed to be finalized from this conference, but it has also not been possible. A group of eight networks places their position in this regard today in a press conference held today in the National Press Club. The group also opines that, the issue of climate change and international negotiations should not be handle by the ministry of Environment and Forest, rather it must be handle by an independent Climate Change Commission.
The Press Conference titled ‘Out come of the CoP22: Analysis and proposal from Civil Society’ was jointly organized by Bangladesh Poribesh Andolan (BAPA), Bangladesh Climate Journalist Forum (BCJF), Bangladesh Indigenous Peoples on Climate Change and Bio Diversity (BIPNetCCBD), Climate Change Development Forum (CCDF), Coastal Development Partnership (CDP), CSRL, EquityBD and FEJB.
Rezaul Karim Chowdhury of EquityBd moderated the press conference while Mustafa Kamal Akand gave the welcome speech. Mr Qumrul Chowdhury of FEJB, Syad Aminul Haque of EquityBD, Pradip Kumar Roy of CSRL and Md. Mujibul Haque Munir of EquityBD also spoke at the occasion.
Syaed Aminul Haque Said, During the tenure of the present minister for the ministry of Environment and Forest inclusion and spaces for the civil society representatives in the government delegation to the climate conference has been abridged. Two senior civil society leaders who have been leading the Bangladesh negotiation team for years did not join this CoP, this is a loss for the country. Their absence disrupts the continuity of the Bangladesh negotiation; they used to ensure communication and balance among the government team and the civil society representatives. He also says, climate change is a national issue, but we don’t see any interest in this regard among the political parties out of power including the main opposition party. We think the Bangladesh government negotiation team should include representatives from parties other than the party in power.
Md. Mujibul Haque Munir said, we are too much frustrated over the outcome of this climate conference since ignorance and tendency of avoiding responsibilities of the rich countries to the climate vulnerable countries were seemed to be very much acute e.g. rich countries did not provide any clear roadmap about funding 100 billion dollar yearly. They did not agree on providing fund under the Loss and Damage issue, only a commitment of 81 million dollar for the adaptation fund has been made in CoP22. This type of position of the rich countries will lead the Climate Genocide in the LDCs and MVCs
Mr Qumrul Chowdhury said, the conference was supposed decide on eight specific agenda, but only one decision has been taken. That is why we are so much frustrated. We think, to get financial support from international climate change fund transparency and accountability within country level fund management must be ensured. Otherwise we will not able to get fund we need to face the challenges of the climate change.
Pardip Kumar Roy said, The LVCs and MVCs clearly expect a leadership role of Bangladesh in the climate change negotiation. Bangladesh should be very much active and vocal in this regard.
Rezaul Karim Chowdhury said, Bangladesh negotiation team has some meritorious and skilled government officers, but there was clear lack of political guidance, which in turn weakened Bangladesh position in the conference. We think climate change issue is not an issue of the ministry of Environment and forest, rather like Philippine, we demand an independent Climate Change Commission in this regard. At least we demand Prime Minister to lead the climate negotiation process.
Please Download [Bangla Press] [English Press] [Position Paper]
Newspaper Link