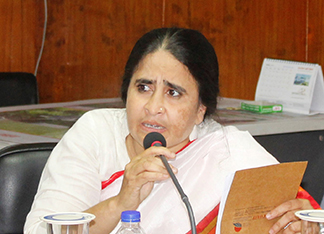 According to the primary estimation of the Ministry of Disaster Management and Relief, impact of cyclone Fani has affected 2,200 families in six districts. Although media claims death tool of 9, but government officials claims that all the deaths are not related to the cyclone, death due to the impact of Fani is only 4 people. It is also said that there is no damage to agriculture in the affected area but it is reported that crops of the vast area are under water. But what is the long-term impact of this cyclone? Shahnaz Parvin’s report.

Shefali Das, a resident of Niyamatpur of Sunamganj Sadar upazila, planted BIRI paddy in six acres of land in haor (large wetland ecosystem). She said that, a lot of the paddy were drowned under the water.

‘The water entered in the haor at night. Though we have to cut the paddy but we can’t because all the paddy are drowned. Now we cannot understand whether we can harvest. Now only god can save us, other than there is no way to live.’ She said.

She is now feared that if she could save the leftover paddy because it is still raining across the border. The day of the paddy harvest came almost nearer. At the same time, the cyclone affected cropland in several areas. Babita Rani Mondal of Shyamnagar in Satkhira planted paddy in 2.5 bighas of land. Now, the danger is that salt water in the region will do harm to the crops.

Our Sundarban is salty, so when the paddy is drowned in the salty water, it shows different types of problems, including being reddish. This paddy doesn’t taste delicious to eat. She says.

Babita Rani says that she isn’t able to sell this paddy later and that is her big fear.

‘I fear that people or dealers will not want to buy those paddies when they are being marketed, also problem for us to eat. The fear that we did not get was due to this disaster. There is another pressure that the price of paddy is low in the market. Still, we have planted this paddy to get two pennies. For paddy seed, fertilizer we cost about 12 thousand taka per bigha. Now we cannot get our money back.’ She says.

After the initial estimation, the Ministry of Disaster and Relief says that Satkhira, Khulna, Bagerhat, Barguna, Bhola and Noakhali districts faced much loss than other districts. Due to the speed of the wind, many houses and trees have demolished. Initially, 2,200 damaged families were found. The government departments think that agriculture will not suffer much. However, a regional leader of COAST Trust, Mst. Rashida Begum, says these cyclones left a long-term impact. The poor people have lost their homes, trees and livestock and suppressed by debt burden.

Rashida Begum said, It is not possible for them to recover these losses. To get back to normal life they take loans from different NGOs or government sectors. They temporarily make houses or make small business or farming. But it is seen that they cannot live for sure for lack of permanent solutions. Because before overcoming the damage caused by the cyclone, they are facing other disasters. They become debt-ridden and poor people remain poor.

These people gradually come to big cities in quest of jobs. Those who have been affected by the Cyclone are also being immediately helped by providing food, cash and tin to build new houses from the Disaster Management and Relief Ministry. But what kind of plans government have for the long-term so that people don’t have to be homeless by the cyclone that come year after year, asked to the senior secretary of the ministry Mohammad Shah Kamal.

Nearly 12,000 houses will be made in June, which can tolerate this type of disaster. The cyclones can come with the speed of the winds is 200 to 220 kilometers, we are building houses which can survive by the cyclone, due to floods. Water cannot rise, because of this we made foundation of these houses two-foot more on the basis of the base year 1988. Higher quality materials have been used so that these can survive minimum of fifty years. We have strongly insisted on the materials. That is, the person who is affected can turn around and he doesn’t need to worry about the house. This will make our work procedure more systematic.

He also says, this year no livestock was damaged. However, more shelter centers are being constructed to save livestock. He added that the dams are being made more sustainable and in the next five years, 1,25,000 disaster tolerable homes will be built.

But Babita Rani or Shefali Das are probably thinking about how they will overcome this loss.