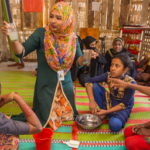 Today on the eve of 19th August 2019 World Humanitarian Day, contribution of Coxsbazarian women will be acknowledged in a public dialogue have organized by Cox’s Bazar CSO NGO Forum (CCNF) will be held in BIAM auditorium, Jhinuk Market, Cox’s Bazar during 10h00 to 13h00. Refugee Relief and Repatriation Commissioner Mr. Abul Kalam will attend in the dialogue as Chief Guest while other guests from UN agencies will participate. There will be participation of around 400 women field workers from local NGOs and around 20 elected women local government leaders will participate. Life of Rosina Akhter, a field worker of Mukti a local NGO who have died during 15th July 2018 in a road accident on the way to camps will be remembered. The group have prepared a English and Bangla position in this regard, where they have depicted three major problems of Rohingya women, which are early marriage, health problems and frustration on future.

They have a call on to Cox’s Bazar women to come forward to extend their cooperation like as what they did as a first responder, they remind the spirit of Honorable Prime Minister Shiekh Hasina to save humanity. The group have proposed four demands in this regard, (i)  Partners must compensate equally to the local NGO workers who loss life in accident while they are in humanitarian response, they should also provide insurance and other equal safety facilities for women field workers, and  (ii) To facilitate sustainability and accountability of the response as it seems as protracted crisis, Local NGOs and local governments should be placed in the leadership of total Rohingya response operation. For details please see notice board of www.cxb-cso-ngo.org and www.coastbd.net.