Home event Temperature Peaking Year Must Be Specified in Marrakech Climate Conference to Save... 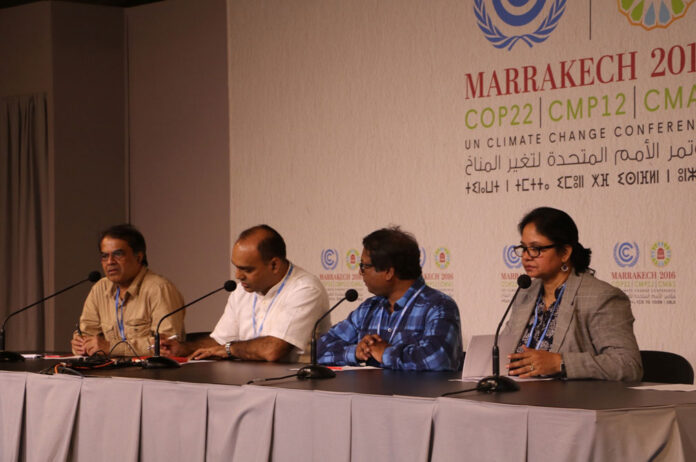 Marrakech8th November 2016. Today civil society right group representing Most Vulnerable Countries (MVC) and Least Developed Countries (LDC) in a press conference in UNFCCC (United Nation Framework on Climate Change Convention) CoP 22 (Conference of Parties), Media Centre inMarrakech climate conference has urged country delegates to decide the Temperature Peaking Year, which has stated in the Paris agreement “as soon as possible” to save the mother earth. The press conference was moderated by Ziaul Haque Mukta CSRL (Campaign for Sustainable Rural Livelihood), on behalf of the group key note position paper was read out by Shamind Neelormi of CSRL, Sanjay Vahsist of Climate Action Network (CAN) South Asia and Rezaul Karim Chowdhury of Equity and Justice Working Group Bangladesh (EquityBD).
The group said that, present trend of NDC (nationally determined contribution) will lead to the global temperature of 3.5 degree Celsius and above which is much above the set temperature of 2 degree Celsius or well below toward 1.5 degree Celsius, as agreed in Paris agreement, will lead much more catastrophes to the MVC and LDCs as said by Sanjay Vahsist of CAN South Asia. He urged state parties must raise NDCs of the countries especially of developed countries.
While presenting group position paper Sharmind Neelormi of CSRL said that, the term in respect of peaking year which has stated in Paris agreement“as soon as possible” should be specified in view of common but differentiated responsibilities and respective capacities (CBDRC). The group proposed that the “Temperature Peaking Year” should be set for developed countries will be on 2020; Developing high emitting countries (like for China and India) should be on 2025 and for Developing countries which includes MVCs and LDCs should be 2035.
Rezaul Karim Chowdhury of EquityBD has said that, Marrakech climate conference has to delivery in respect of Loss and Damage discourse especially there should be a work plan from Warsaw Implementation Mechanism (WIM). He said that to recuperate loss and damage due to climate change there should be additional financing in this regard. He also urged that there must be scope of integration of work on climate induced displacement in WIM process.
Ziaul Haque Mukta the moderator the press conference said that, Marrakech must deliver a predictable road map in respect of much committed 100 billion $ climate finance from 2020 and also financing road map until 2020, which must be additional to other development assistance to the developing countries. And there must be well balance allocation i.e. should be 50: 50 for mitigation and adaptation.