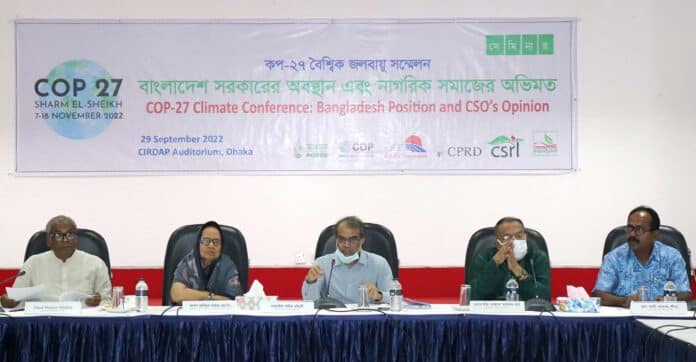 Dhaka, 29 September 2022.  Civil society organizations (CSOs) demanded a strong position from the government to include the Loss & Damage [L&D] issue as an agenda in the upcoming UN climate conference (Conference of the Parties, CoP 27). From a seminar organized today, they also opined that, as one of the Most Vulnerable Countries (MVC), Bangladesh also should adopt a firm stance in support of a legally binding commitment to “Zero Emission” target followed by 1.5-degree temperature goal. COAST foundation hosted a seminar at CIRDAP today titled “CoP-27: Government Position and Civil Societies opinion”.

Aminul Hoque said that, the CoP 27 is crucial as the developed countries are trying to breach their all-previous commitment and tend to bi-pass the basic principles of Paris Agreement [PA]. They put new concepts like “Net Zero” emission, New Collective & Quantified Goal [NCQG]” on finance etc. These vague or elusive concepts proposed by the developed countries in fact deeply inequitable and doesn’t commensurate with meaningful reductions of global warming to 1.5C under PA. He also concerned the new financial concept hardly ensure a real and action oriented financial support in the context of MVCs and their recurring facing loss and damages.

He addressed a few demands to the government delegation; are i). Take strong position to include the loss & damage issue in CoP 27 agenda, ii). Rich countries must pledge “real zero 2030” targets through NDC instead of so called “net zero” 2050 concept. This plan will be real in line with fair shares for 1.5-degree Celsius temperature goal, and iii). New Climate finance architecture must be as a non-debt instrument for MVCs. That means the NCQG should priorities grants first, then highly concessional finance.

Md. Shamsuddoha said that government need to raise voice to increase adaptation finance in the negotiation that will be out of ODA [Official Development Assistance] and non-debt structure. Voice also should be strengthening against the debt-swap technique being used by developed countries for climate financing he added.

Shrif Jamil opine and suggest government taking clear stand in CoP 27 against Net Zero compliance as Bangladesh has no commitment on this concept except Zero emission by 2050. Negotiators have to be strategic before sign any protocol under PA where country will be able to reap its benefit he opined.

Ziaul Hoque Mukta stated that Bangladesh along with many other countries are struggling with multiple climate crisis along with hundreds of thousands of people displaced by sea-level rise, flooding, and intense cyclones. These need to address and demanded a separate regime for climate induced displacement under UNFCCC in CoP negotiation.

Mostak Ahmed Robi MP stressed on united voice in global climate negotiation by both government and CSOs to achieve desire goal. In this regard he reiterates our Prime Minister call to 1.5 degree and appropriate finance for adaptation actions. Mr. Shamim, Rafiqul Islam and many others opine that Bangladesh has played a positive role in the climate negotiations because of the strong cooperation between civil society and the government, which was previously our strength and is now become weakened. They suggested that for CoP 27, a common position be prepared, including the opinion of the CSO.