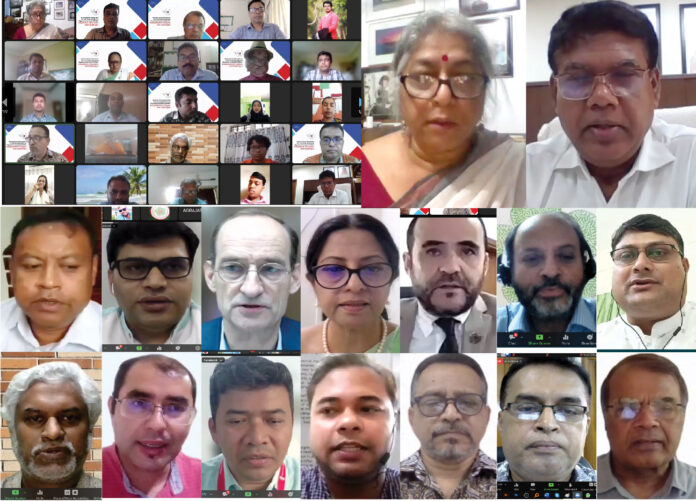 Arifur Rahman of YPSA gave keynote presentation, where key demands are transparency of aid, urged UN and INGOs to limit its role for fundraising, monitoring and technical assistance, while local and national NGOs to lead the field operation.

Shireen Huq as the chair of the webinar, urged the government to announce a plan and redouble on global campaign on repatriation. She and Mr. Nayeem Gowhar Warha also urged the government to consider signing the Geneva convention on Refugees, as the nation was a refugee during 1971, and now the country is facilitating Rohingya refugees. She said that these will enhance Bangladesh’s reputation.

Ashis Damle of Oxfam requests INGOs to initiate a global campaign so that there will be early repatriation and there will be consistent attention on Rohingya issues, he said these are the best help to Bangladesh.

Dilruba Haider of UNWomen said that Rohingya women in the camp now want to participate in the response management, they organize themselves against violence against women. Mr. Asif Munier said, there should be documentation of good work and its process, especially to facilitate knowledge transfer to the local humanitarian workers.

Johannes van der Klaauw said the role of local NGOs most important, including UN agencies INGOs should give importance in this regard. Mr. Rajan Ghimrie of Multeser International gives importance on capacity inputs to organizational building of local organizations. Mr. Abdussattar Eosev of IoM said that, for dignified repatriation there has to be collective effort, there are a lot of tensions around Rohingya, we all have to be concerned in this regard. Abu Morshed Chowdhury said, localization road map has to be implemented, he gave importance on participation of local government in response management.