Home event Government to ensure minimum 2% of GDP resource as climate finance for... 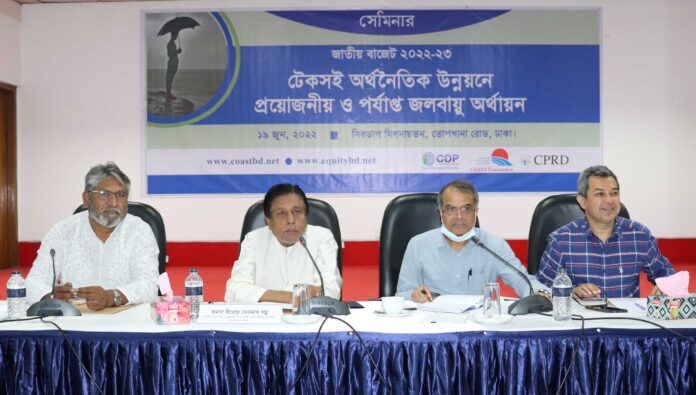 Dhaka 19 June 2022, in a seminar, Civil Society (CSOs) and expert have demanded at least 2% of GDP [Gross Domestic Product] resource for climate financing through national budgetary process in every year. They also urged government to include coastal infrastructure issues as a prioritized investment sector to achieve sustainable and climate resilient economy. The seminar is jointly organized by COAST Foundation, CPRD [Center for Participatory Research & Development] and CDP [Coastal Development Partnership] at CIRDAP auditorium in the capital today.

Aminul Hoque of COAST said that government commitment to fight climate change has hardly been reflected in his declared national budget 22-23 fiscal year. The amount allocated taka 30,531 crores as climate budget is very traditional and business as usual which is unable to fulfill the demand. He mentioned that govt. has prepared Delta plan-2100, NDC 2030 [National Determined Contribution 2030], BCCSAP-2009 and recently drafted NAP [National Adaption Plan] those requires around 2.20% of GDP to implement, but current allocation is only 0.69%. He put a few demands regarding climate financing issues are (i) Government must ensure at least 2% of GDP as climate financing according to their strategic plans and real time implement, (ii) Include coastal infrastructure issues as one of the prioritized investment sectors (iii) Separate allocation for embankment construction, (iv) Engage Local Government authority to repair maintenance of embankment and (v) Adequate allocation for climate adaptive agriculture research and development.

Dhirendra Debnath Shambhu MP, and the Chair of the Parliamentary Standing Committee on Ministry of Fishery and Livestock opined that the climate financing is important and need to increase for holistic and balance development in socio-economic perspectives. He demanded a separate ministry or board at least for coastal development issues.

Sharif Jamil said we don’t expect the growth of a few capitalists and thus achieving socio-economic sustainability hardly be possible ignoring the environmental issues. Government will have to think universal sustainability that would come from a balance planning of both economic, environment and climate change issues.

Bazlur Rahaman said, there have different problems and climatic challenges among the East coast, south-west and mid-coastal areas and planning should be developed accordingly. He demands special health care for vulnerable coastal women acute suffering with reproductive health.

Md. Shamsuddoha said that destructive development plans increasing the risk of climatic negative impacts in country those are being observed already and government must rethink on them. He demands to review the NAP [National Adaptation Plan] through taking grassroots opinion and further development followed by existing climate hotspots and their real needs.

Rezaul Karim Chowdhury opined that the “Delta Plan 2100” is effective, but there is hardly any resource allocation for this.  There are also concern on proper monitoring of climate finance utilization at local level.  Government should also consider to reform and strengthen institutional capacity in this regard to draw attention of global finance for fighting climate change issues.