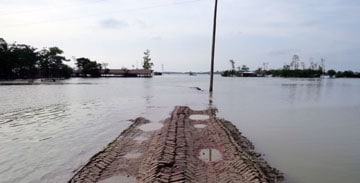 The cyclone “Komen” hit Cox’s Bazar coast during July 29-31, 2015 caused flash flood and tidal surges in the area. More than 37 thousand families were affected and have been displaced from their houses and still they are suffering from water logging, communication disruption

, severe scarcity of drinking water and sanitation facilities. Just after cyclone, COAST assessed the loss and vulnerabilities of the affected families and then after COAST decided to help those households with food package as they were unable to go outside for work. The package contained 10 kg of rice, 2 kg potato, 1 litre of edible oil, 1 kg of onion, 1 kg of pulse and 250 gm of green chilies for meeting their immediate needs of food for at least 3 days. The selection of the households was the families those have i) children, ii) lactating and pregnant mothers, iii) old age people and iv) differently able people. The distribution was through the coordination of local administration, representatives of local government to avoid the duplication of supports. Total 1000 households were under the coverage of initial supports. COAST has accomplished these support with its own resources. Now COAST is developing a plan for long term rehabilitation of the affected areas for ensuring water and sanitation and livelihoods.