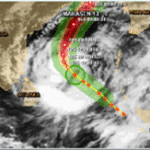 The cyclone Mahasen in fact affected our Bhola and Outreach Islands region, although we have taken all out preparation in Cox’s Bazar region.

It was forecasted that by the next 3 to 5 hours the cyclone Mahasen would cross Sitakunda and Chittagong city, but it is getting weaker now. There is strong wind in all of our project areas in Bhola and Cox’ s Bazar region. Although in Cox’s Bazar it is sunshine, the wind speed is still increasing a bit. Our staffs are still pursuing people to stay in safe shelters and not to leave the shelters until high tide and cyclone situation pass out.

So far there are no information of storm surge, but there are huge tree falling on the roads of Bhola to Charfassion and Chittagong to Teknaf as well as in Cox’s Bazar town. Concerned local administration took quick steps to clean the roads.

In Bhola region, 1 person (some Kashem, son of Chan Miah, age 80) has died due to a tree fall in Dholigaurnagar union of Lalmohon upazila as reported. Another child (Parvez, son of Md Alamgir, age 6) has died in Rasulpur union of Charfassion upazila. There is no other report of such death casualties in our regions.

In Cox’s Bazar region, we have provided food and water to the people who took shelters during last night (15th May) and it included 291 packets of dry food in Kutubdia and 150 kg of rice mixed with vegetable (kichuri) in Ukhia as required by the local administration.

Apart from these we have ensured water supply in almost all cyclone shelters in Pekua, Moheskhli and Teknaf under Cox’s Bazar region. We have contributed Taka 20 thousand (US$ 250) to the local administration and local government for preparing food for the people who are still in different cyclone shelters in Kutubdia. People have taken shelters in our Dhalchar and Charfassion office buildings too. We are also providing them cooked food.