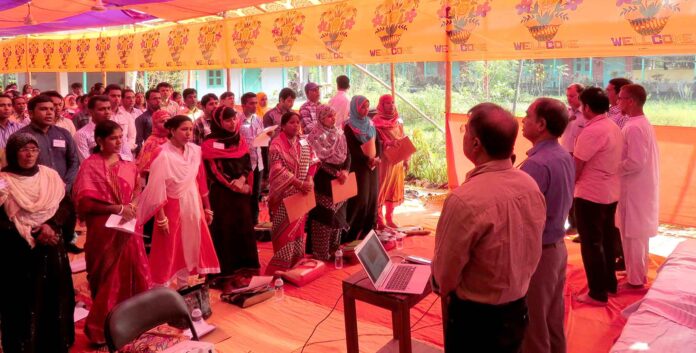 Annual Staff Conference for all Projects of Bhola
26 February 2017
The Annual Staff Conference for Bhola region especially for the project staff started at 9.00 am with the national anthem on 26 February 2017 and with the same influential speech that of the first day. This event was moderated by Md. Abul Hasan, PC of Responsive Union Parishad (RUP) Project. And as a special guest the Executive Director of COAST Trust was with this occasion throughout the whole day.

It was started with an introductory session. Every project participant present in this mentioned their working area, designation and their total years of involvement with COAST Trust.

During conference, the honorable Executive Director told, COAST Trust doesn’t only want to engage in financial activities for its growth. Unlike the other NGOs, it wants to work at the sector of social development especially for women’s’ empowerment. He expressed that COAST Trust is going to implement legal endowment fund soon and it will be merged with CLS project and their project paralegals. Secondly, COAST Trust has taken necessary steps for emergency preparedness before any natural disaster and without any help from others. Thirdly, COAST’s Community Radio is “Radio Meghna”. Since its beginning, it has helped a lot to disseminate the key messages of the ongoing donor funded projects. It has had a great positive impact to sensitize the local people against child marriage and the reasons behind it, impacts of climate change, raising legal awareness and so on. [Bhola Report] [Cox’s Bazar Report_English] [Cox’s Bazar Report_Bangla]