Home event JRP must be conflict and security sensitive, a way forward to localization... 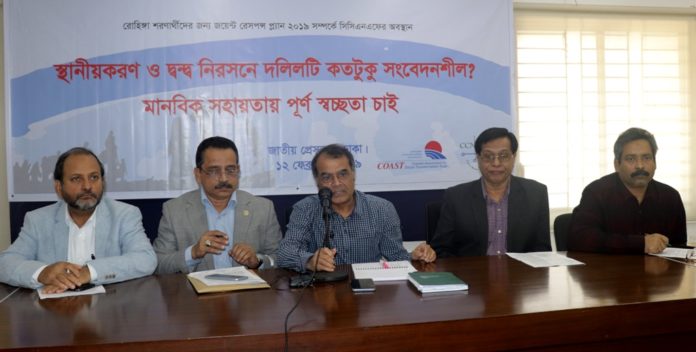 Dhaka, 12th February 2019. Today CCNF a network of around 50 local NGO CSOs working in Cox’s Bazar and COAST Trust an NGO working in coastal area and in rohingya response jointly in a press conference in National Press Club Dhaka criticize the JRP 2019, which was prepared by ISCG (Inter Sectoral Coordination Group) in Rohingya response. They mentioned that it has far short of participation of local government and NGOs, and it is not conflict and security sensitive, hardly transparent on aid and has very little on way forward toward localization. The press conference was presided by CCNF Co Chair and Executive Director COAST Trust Mr Rezaul Karim Chowdhury, Mr Abu Morshed Chowdhury another Co Chair and Executive Director PHALS Coxsbazar read out and explained the position paper, other speakers of the press conference are Mr Nayeem Gowhar Warha of Disaster Forum, Mr Rafiqul Islam Director Federation of NGOs in Bangladesh, Mr Mostafa Kamal Akhanda Assitant Director COAST Trust has made welcome address to the participants. The press conference was also attended by Mr Tanvir Ahmed from NIRAPOD.
Mr Abu Morshed Chowdhury said that, now there are incidences of conflicts are arising and also there are security concern from different dimensions but the JRP 2019 overwhelm bias and business as usual to service delivery. It should give importance to peaceful co-existence and social cohesion. He also mentioned that there was a Grand Bargain mission in Cox’s Bazar during September 2018 which have recommend 24 parameter on localization and Whole of Society Approach and proposed a road map should be by next three year. But the UN agencies and INGOs has little planning in this regard, especially in JRP 2019 there are only one para in this regard all though they are the signatory of Grand Bargain commitment, again and again reiterated their commitment. He also mentioned, there was proposal for environmental recovery and pooled fund for Cox’s Bazar also demanded compensation to the social afforestation holder who lost their forest, but there was no commitment on these.
Mr Rezaul Karim Chowdhury said that, so far there are per month per Rohingya family has received $ 351, which was in 2017 $ 593, and it may go down to $ 215 in 2019, if one estimate the declining aid ratio, which is around 30 to 60 %. The only way to sustain the operation, the full aid transparency so that public will able to participate and propose to reduce transaction cost with effectivity continuously, UN agencies and INGOs should withdraw from field operation that they will only busy in monitoring and capacity building, and it is the way of localization. He also said, localization should be happened in planned way, not by bound that when the aid will dry up, existence of 1300 expatriate and around 600 vehicle in the operation hardly demand driven, UN agencies and INGOs must stop the race of ever escalating salary structure which is raising operation cost and creating un healthy competition of staff poaching and a consumerist and unstable human resources. He demanded transparency of different classification of cost that ISCG including UN agency and INGOs should publish, ie, over head or management cost, direct input cost to Rohingya and Host community, and what is the ratio with local partnership cost.
Mr Nayeem Gowhar Warha of Disaster Forum, as a country we should have a long term policy on Rohingya issues, there should be participation of Rohingya refugees too. UN agencies and INGOs use the lack of capacity of local NGOs as an excuse, but they do staff poaching from local NGOs. The country should initiate track 2 public diplomacy in international level. Mr Rafiqul Islam of Federation of NGOs in Bangladesh said that, civil society and NGO sector in Bangladesh has long history and good reputation, UN agencies and INGOs should not forget this. International community should take responsibility of the Rohingya refugees.
CCNF and COAST Trust has circulated a position paper in the press conference, which outline 6 specific demands, which are (i) all UN agencies and INGOs must have localization policies, they should accommodate the local NGOs first in partnership, (ii) they should also prepare conflict of interest policy for their national staff so that they will not be able to influence in the partnership process, (iii) there must be a complain response mechanism open for all stakeholders, (iv) there should be participation and accountability policy toward Rohingya, (v) 70 % field operation and service staff job should be for local but with competition and quality, (vi) there should not be in any head hunting, all job circular should be publish in Cox’s Bazar, there should be an ethical recruitment policy and a common salary frame work have to be prepared and followed.
Please download Related Paper [Bangla Press Release] [English Press Release] [Bangla Position Paper] [English Position Paper]
Photos​