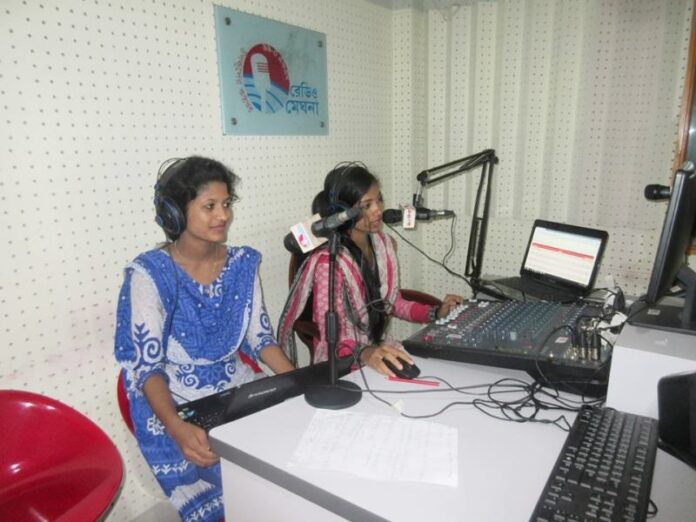 Community Radio Stations; Radio Meghna 99.o fm (www.radiomeghna.net) broadcasted 24 hours program during the cyclone ‘Mora’ on 29th and 30th May, 2017. The broadcast was for preparedness of community people for saving their lives and assets. Its online transmission also was live that was listened worldwide. The Radio continuously broadcasted the Government weather forecast and Information of the community.
In addition to the program, adolescent girls of the Radio Meghna took interviews of Government officials, (UNOs, PIU officers, Representatives of Bangladesh Betar) Red Crescent Volunteers, Elected representatives, Journalists and community and NGOs leaders of different Upazilas and adjacent Islands of Cox’sbazar and Bhola districts. And broadcasted the interviews for the community.
Aminul Haque of Bangladesh Betar representative of Cox’s Bazar said, “we held a meeting along with UNO of Cox’s Bazar, Local political leaders and Local Red Crescent representatives for preparedness of Mora and everybody now stand by accordingly.”
Md. Shahidul Islam, UNO of Chakaria, said people who were in Mora risk are now in their home and all are fine till now.
Dipu Kawser of Red Crescent Senior Officer of Cox’s Bazar said, people of Kutubdia and its surroundings were more vulnerable therefore they brought them in Upazilla Sodor and took all preparation for their live save and secure.
Bazlur Rahman, Executive Director of BNNRC said, Community Radio played very important role during any disaster through giving messages such as weather forecast, preparedness of live saving information as well as assets.
Shima Rani, volunteer of Red Crescent representative of Sonadia village, recognized herself as volunteer of 30 years, said the situation was fine if it gets worse, community people will go to shelter home.
Mozammel Hoque, Disaster Management Officer of Charfassion said, Mora hit in Kotubdia, Moheshkhali and Cox,s Bazar, the weather was windy here.” We hope that we will be save this time as we took all preparation to face Mora.”
Monower Hossain, UNO of Charfession said, “ we have done all preparation and delegated jobs to the respective officers. We thought that we able to face any type of natural disaster”.
Jaynul Abedin Akanda, Upazilla Chairperson of Charfassion said they have had meeting with all stake holders along with school and madrasa management committee as they will be stand by to face Mora.
Hassen Mohajon, UP chairman of Char Kukri Mukri said the weather was not worse now and they had all preparation to face Mora.