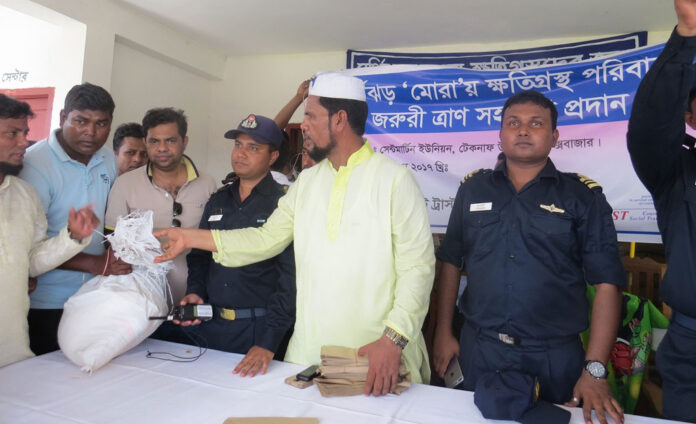 On 30 May 2017 Cyclone Mora made landfall in Bangladesh’s coastal region at 6 AM in the morning. Approximately 2,811,465 people were affected across 12 high-risk coastal districts in Bangladesh. According to government sources, nearly 300,000 people were evacuated from affected areas on the southern coast. Cox’s Bazaar district was particularly heavily affected.

According to District Commissioner (D.C.) for the district of Cox’s Bazar, 6 people died and 60 other injured. More than 17,023 houses have been fully damaged, 35516 houses have been partly damaged. In total 52539 families have been affected (Approximately 288000 individuals, considering 5.5 individuals in an average in each families), The island of Saint Martins and Shah Pari also have been sustained significant damages.

Huge number of trees have been fallen down, electricity disrupted, 80% of the battle-leaf garden have been severely damaged along with other crops. In Cox’sbazar district 33 Unions of 7 Upazilas are mostly affected.

COAST had taken necessary preparation for immediate responses when the forecast if the cyclone were declared.  Since 29th May COAST colleagues have been implementing some interventions in Bhola and Cox’sbazar as first responders and with COAST own fund. It established a central control room at Dhaka and other regional control Room at Cox’sbazar and Bhola. COAST has so far undertaken the following responses:

4.  A part from above, COAST is gathering information with consultation of local Authorities and Elected Representatives about other’s responses and more meticulous demand of the affected communities from each of the seven Upazilas of Cox’sbazar district. COAST may seek outside supports and may take bigger response works in complementarily. The response works may have advocacy along with relief assistance.

Based on primary data COAST has recognized the following demands of the community to be addressed:

COAST is hopeful to draw attention of potential donors and development partners for implementing the above proposed interventions. If the organization somehow fails to go for partnership with others than it will try  to implement those works by its own fund and in a minimum scale.
Photos