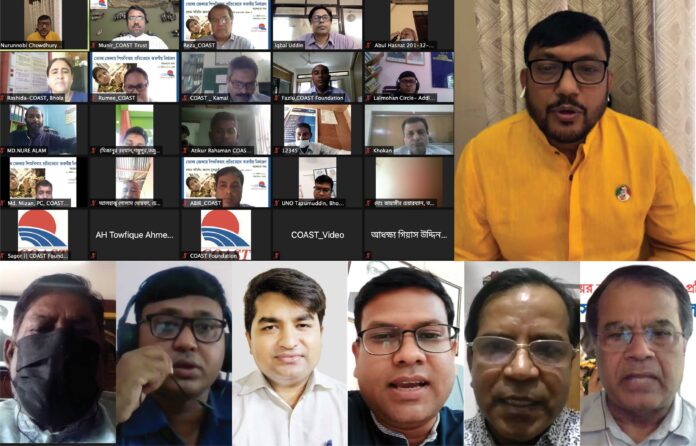 Lalmohan, Bhola, 10 April, 2021: Impact of child marriage can be worsened to a girl. Girl of a child marriage can be a cause of population growth, malnutrition, birth of crippled child, and she can even loose her rights. On the other, an educated mother would never arrange child marriage for her daughter. So, there are no alternatives of strengthening education facilities for girls and awareness for parents. Besides, activeness of local representatives, administrations and local committees to prevent child marriage, stop fake birth registration and role play of schools, etc. are very important. Nurunnabi Chowdhury Shawon, MP, Bhola-3, said this as chief guest at a webinar organized by COAST Foundation today.

The country child marriage rate is 51.4% but it is 60.3% in Bhola, which is alarming. Safety and security of girls, lack of awareness of parents, less priority to girls, less use of hotlines numbers, reluctance of local representatives and administrations are behind the child marriage rates in Bhola. COVID-19 also has a lot of toll on child marriage, which’s have connections to a violation against women, study said.

A child marriage is organized but local UP members and their office do not know it, it is impossible.  So, they should be accountable for that, said AH Towfique Ahmed. Char areas in Tazumuddin upazila are prone to child marriage. Special initiatives should be taken there, said Mosharraf Hossain Dulal. Committee to prevent child marriage should be active more said Al Noman. More scholarships to girls with increase amount will help reducing child marriage, he underscored. Russellur Rahman said, local UP representatives always calculate vote issue while going for preventing child marriage. Local administration gets child marriage news most of the times after it performed. He requests local representatives inform local administration immediately when they get the news. Pallab Kumar Hazra requests activeness of Upazila, Union and Ward level committees for preventing child marriage and send him their meeting minutes for information and action. Al Noman underscores regular meeting with the parents of adolescents, awareness raising activities and role paly of everyone to prevent child marriage. Abul Kashem said, we stopped child marriage with the help of UNICEF adolescent clubs. Awareness comes first, he said. Mizanur Rahman said, child marriage is a social curse, we should work together to eliminate this. Besides parents, Kazi also has the responsibility not to conduct child marriage. Rezaul Karim Chowdhury said, COAST is working since long for women empowerment. We will continue it with the support of you.