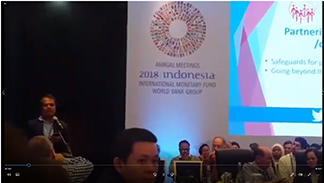 Bali, 9th October 2018: As the signatory of Grand Bargain Principles (an UN led discourse of WHS) World Bank is urged to promote localization i.e. partnering with the local organizations in Cox’s Bazar, in the Rohingya refugee responses in Bangladesh.

Mr. Rezaul Karim Chowdhury, Executive Director of COAST Trust and Co-Chair of CCNF (Cox’s Bazar CSO-NGO Forum) made this urge in his speech during the session titled ‘Meet with EDs of World Bank’. He announces 3 concrete proposals for the World Bank for the Rohingya refugee response in Cox’s Bazar and those are:
1. To prepare a Rohingya pooled fund in view of GB commitment to promote local NGOs and Community who are leading the response.
2. To support GOB in view of UNHCR solidarity paper to support and assist the government of Bangladesh in macro-economic level, and
3. To consider support GOB for area development approach in Cox’s Bazar to promote economic, social and human development potentialities in the long run.

Mr. Hasan, Dean of EDs of World Bank, Ms. Aparna, ED responsible for Bangladesh were also present in the meeting that took place on 9th October 2018 in Bali, Indonesia.

In his speech, Mr. Rezaul Karim Chowdhury thanked the WB president Dr. Jim for announcing half a billion USD for Rohingya response. He also mentioned that we had an opportunity to meet Dr. Jim along with UNSG and hand over a memorandum in this relation.

Mr. Reza raised question in his speech that why WB should not prepare a plan for localization so that local NGOs / CSOs and local communities would lead a humanitarian and development efforts through a ‘Whole of Society Approach’ (WOSA) as WB is one of the signatories of GB (Grand Bargain). He stressed on reducing the fund management cost through a pragmatic reduction of the internationalized response approach.

Mr. Reza also said, the Government of Bangladesh deserves more macro-economic level solidarity support and Cox’s Bazar requires more area development support during the refugee response. Otherwise, this will create vulnerability in the long run for the local people as well as the national economy.

Dean of EDs Mr. Hasan said in response that partnering with local NGOs is a reality of political economy.

Ms Aparna the ED responsible for Bangladesh accepted the notion of Mr. Reza and said that partnering with local NGOs is a smart partnership.

While explaining the Grand Bargain, Mr. Reza said, WB is the distinguished signatory of GB commitments where there are 10 workstreams with 51 indicators. Important feature is stream 2 i.e. localization, that means giving the steering of humanitarian response to the local actors e.g. local government and local NGOs. It also means, the reduction of transaction cost through effective coordination and continuous striving, accountability to the local community and affected population, and finally, use of local knowledge and local resources. [Click here for video link]