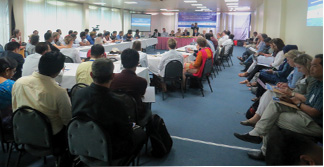 The dialogue is organized on the eve of UN launches a Joint Response Plan (JRP) with a financial need of approximately 940 million Dollars up to December 2018 in Bangladesh in this purpose. Grand Bargain Commitments are developed to strengthen the capacity of the local community, non government organizations (NGO) / civil society organization instead of replacing them in humanitarian response.