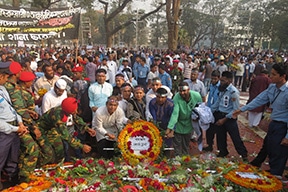 21st February 2016. 21st February is International Mother Language Day. In 1952 some students from the University of Dhaka, Jagannath University and Dhaka Medical College were shot dead by police while they were demonstrating for the recognition of Bangla as one of the two national languages of then East Pakistan. This 21st February of 1952 recognizes as the sewing the seeds of the independence movement to achieve the much desired independence of Bangladesh from its Pakistani rulers.

COAST pays its homage to those language heroes with great respect echoing its endeavor to ensure a society with equity and justice. COAST believes that the spirit behind this sacrifice is for equity and justice. It is for people’s right to express their opinion without any fear, without any obstacle and for right to practice mother’s language at all level of the state. This is what is the key spirit of democracy.

COAST always observes the International Mother Language Day, on 21st February, at all of its locations in the working areas of the organization in 7 districts. This is a day when the whole nation feel united irrespective of religion, class, occupation, race or any other division. This is a moment when the nation mourn but get the spirit to step ahead. This is the spirit that teaches us to be united and practices democracy.