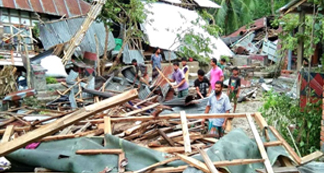 (NDRCC) informed that, at least 36 villages in Patuakhali, Bagerhat, Bhola and Satkhira were inundated as storm surges breached earthen dykes and overflew them. A total of 32.28km of earthen dykes were damaged. Around 13,000 houses were fully or partially damaged due to cyclonic storm in the coastal districts, including Bhola, Chandpur, Bagerhat, Khulna, Satkhira, Patuakhali and Barguna, according to the NDRCC. Crops on 330 acres were totally damaged while those on 52,728 acres were partially affected. Around 16 lakh people took shelter in 4,071 cyclone shelters in 19 coastal districts on Friday and early yesterday. By yesterday noon, however, they started going back to their homes as the weather improved. [Click here details report]