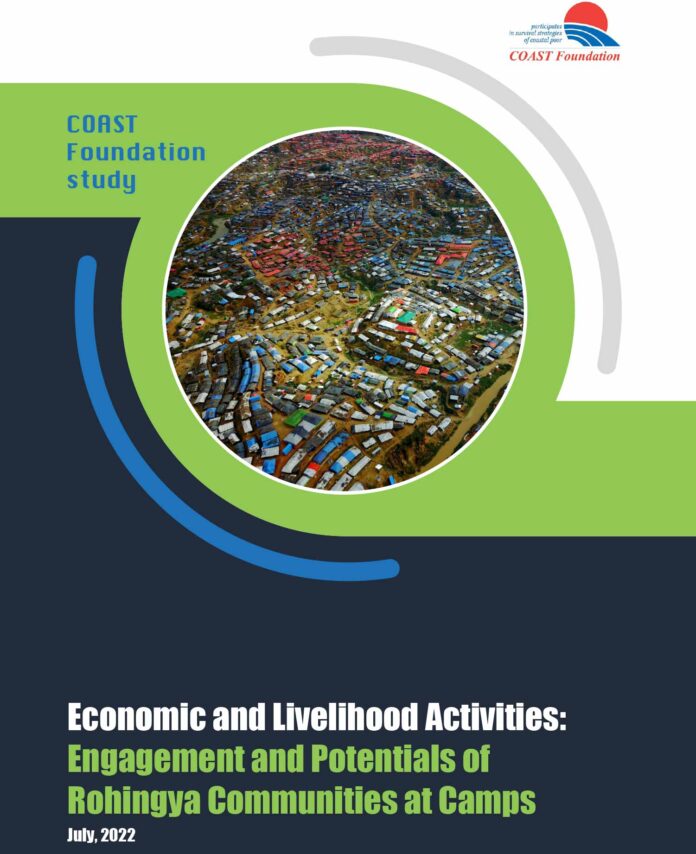 This study by COAST looked into the economic and livelihood engagement of the Rohingya community living in Bangladesh camps in Cox’s Bazar. Findings depict some disturbing pictures vis-à-vis their opportunities to participate in economic activities. With little access to market, women, especially those who head the households, find it difficult to live with dignity in the absence of reliable sources of income. This study found only 7% Rohingya women are involved in economic activities inside the camps, when the figure is 57.46% for the overall Rohingya population.

The study found almost half of the Rohingyas (42.54.%) are involved in different economic activities inside the camps. Of the respondents involved in economic pursuits, 19.48% are engaged in vegetable cultivation and 15.19% in running grocery stores. Findings also show 43.09% of the respondents have the opportunity to engage in skill labor like building shelters/ homes, repair of solar panels and maintenance work, and vegetable cultivation and 36.46% to run grocery stores. During interviews, the respondents sought various input support — 46.41% wanted seeds, 56.35% wanted chickens and 40.33% sought poultry sheds.

Almost all (95.58%) respondents viewed that these products have great potentials for sale inside the camps. As for other livelihoods skills, 32.60% can make bamboo products, while 47.51% are in need for needles, yarn, and frames for designing tapestry on clothes. More than half (51.93%) of the respondents think setting up shops inside the camps is a good option to sell their products.