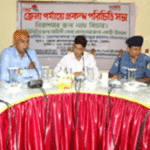 Bhola, 12 September 2013: COAST Trust introduces a new project called “Justice for Safety” in Bhola district. This project is funded by the UKaid with a fund of BDT- 64.06 millions for providing legal services to at 25 Unions of 3 Upazilas of Bhola District. Deputy Commissioner Mr. Khondokar Mustafizur Rahman was present as chief guest and the meeting was presided by President of Bhola press club Mr. Habibur Rahman. There were 100 participants along with journalist, civil society members, elected representatives, COAST officials and community people. At the meeting the speakers welcome the project and hope that the disaster vulnerable target community will get legal support and counseling in disputes over land grabbing, women and child discrimination, dowry, domestic violence, river piracy and so on.

Mr. Sanat Kumar Bhowmik the Director of COAST Trust in his welcome speech expects from audiences that people will help from their own place to implementing this project. Among other distinguish guests Mr. Moniruzzaman the Police Super of Bhola, Mrs. Parvin Akter the principal of Bhola Govt. College, Monwar Hossain the additional magistrate of Bhola, Mr. Neyamot Ullah district correspondent of daily Prothom Alo and many other stakeholders spoke in the meeting.

The program chief guest Mr. Khondokar Mustafizur Rahman says, the project is supporting in strengthening the justice system through activating Village Courts in selected Union Parishads in Bhola. It also strives to develop capacity of the Village Courts members, elected representatives and other relevant officials in a bid to run the village courts smoothly. It also carries out comprehensive advocacy activities to involve the community and other key stakeholders actively in efforts to activating the Village Courts through enhancing their awareness on legal rights and overall justice system. He also says, the project aims at strengthening a system of alternative dispute resolution in Union Parishads through the establishment of village courts. It intends to improve access to justice for disadvantaged and marginalized groups and enhance human rights systems and processes in Bhola.

The chair in his concluding remarks said that COAST Trust will go ahead by their gained experiences which will help to implementation of this project. He also said COAST Trust is only organizations who are announce by leaflet to the people by focusing the whole project including the approved budget of said project. By his speech the program is called to finish.
Photos