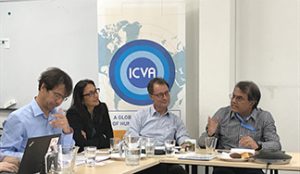 Geneva, 17th March. Rezaul Karim Chowdhury Co-Chair of CCNF (Cox’s Bazar CSO NGO Forum) and Executive Director of COAST in Geneva observed the JRP lunching in UN building in Geneva. JRP sought $950 million for the period of March to December 2018. UNHCR chief Phillip Grandi moderated the session and was attended by Bangladesh State Minister Shahrier Alam, UN Resident Coordinator (RC) from Dhaka Mia Seppo and Bangladesh Red Crescent Society Secretary General Feroz Salah Uddin. They have spoken on the occasion.
State Minister Shahrier Alam M.P repeatedly urged for international community support for political solution of the crisis i.e. repatriation. He expressed his frustration while Bangladesh given the name of 8000, Myanmar government only cleared around 300 names. He also said that how government invested huge amount of officials for refugee management and preparing Bashanchar for relocating at least 100 thousand refuges. He said that this is sort of huge load upon already resource constrained Bangladesh economy.
UNRC mentioned that civil society participation in the JRP has been ensured and localization will be further integrated.
Ambassador Swing of IoM said that, present rate of depleting forest for firewood collection then by the end of 2019 all forest land of Cox’s Bazar will be wither away.
UNHCR chief Phillip Grandi said that there are two pillars of this JRP, the host community and the Rohigya refugees, he also said that it is already a pressure on low development performing district Cox’s Bazar. Almost all the delegates praise the government of Bangladesh for its generosity on hosting this nearly 1 million Rohingyas.
There were critical questions from the floor, from different country delegates including is this not highly ambitious in respect of fund raising? They expressed doubt on whether the target will be fulfilled. There are also question raised, who will lead this relief operation and ensure the quality of coordination?
Before of the lunching, Rezaul Karim Chowdhury ( Executive Director – COAST Trust ) has chaired a NGO session in the conference room of ICVA (International Council of Voluntary Association) on a session on presenting findings of two recent review of Rohingya relief activities. He reiterated the fact that there are fierce competition of visibility from INGOs and UN agencies, in fact which has grossly undermined their commitment toward Grand Bargain principles and the operation has little accountability to the local authority and with little involvement of local NGOs.
The coordination system culture of ISCG (Inter Sectorial Coordination Group) itself has a lot of limitation in this regard, which needed to be overhauled. He clearly mentioned, if there are no clear pathway and integration of reducing transaction cost, accountability to the local authority and their participation and partnering to the local organization, the whole refugee relief will become a burden for local community and of the government in future.
Please Download [English Press]
Photo