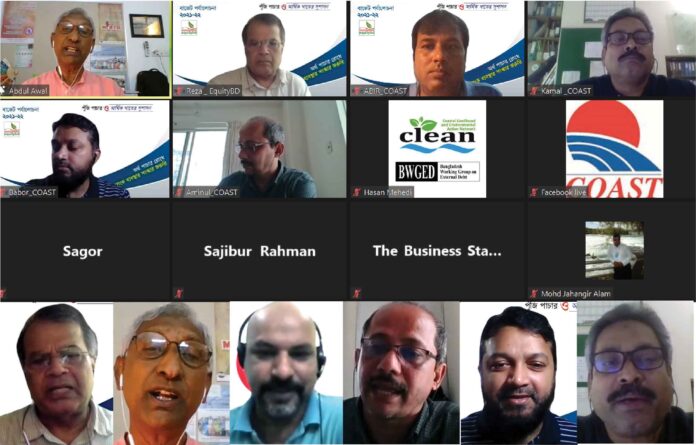 Dhaka, 05 June 2021. Today right based civil society organizations and networks leaded by EquityBD has organized an online press conference on national budget 2021-22 and termed the proposed revenue collection policies is business as usual and against the principles of redistributive justice following existing pandemic and increasing poverty context. They demanded government to stop capital flight and enhance revenue mobilization. They also opined that reforming Bank Sector is fundamental to strengthen governance practice in achieving the goal.

Ahsanul Karim said in his key note presentation, government proposed BDT 3.30 trillion Revenue mobilization through NBR [National Board of Revenue] and stepping to expand tax and VAT net in rural areas but did not mention any word how recovery approach of poor and middle classes suffering due to corona pandemic and pressurized by increasing trend of livelihood expenditures. This is a discriminatory approach in present situation of unemployment and redistributive justice. Better government should declare at least VAT exemption on daily essentials those will make easy the livelihood pressure of poor and middle classes. He put five demand relating the issue are (i). Strengthen governance mechanism and its practices in financial sector especially in bank sector to stop the over or under invoicing and capital flight, (ii). Capacitate NBR with modern technologies to strengthen the income tax collection, (iii). Declare VAT exemption for poor and middle classes at least on ten daily essentials, (iv). Declare unemployment allowance for job losers as direct financial support package and (v). Government must take necessary step in reducing corruption in all sector specially focusing on public procurement practices.

Abdul Awal said that government’s development ideology and budgeting plan is somehow unable to reach the poor and marginal people. We facilitate the riches those are tax dodger and engage with capital flight activities. So it’s needed to stop tax dodging at first and govt. should step accordingly to work with NBR.

Hasan Mehedi opined that country debt burden is now around 40% of GDP and the proposed borrowing plan will increase the burden again indeed. He also mention the health sector is failed to face corona crisis despite supported around 37,000 crore [US$ 4.3 billion] through loan in last fiscal year.

Aminul Hoque said that Bank sector is core associate in most cases for trade misinvoicing and illegal capital flight. So that reformation is fundamental to stop this phenomenon. He also recommended government to ensure a fair and competitive environment in economic and business sectors to control profiteering. Rezaul Karim said that government has created confusion continuously on black money whitening but it was not say anything in proposed budget on how to stop capital flight which could be a great source of resource mobilization. This is an injustice in view of our principle of liberation war.