Home event Affected people and community must be included in all stage of disaster... 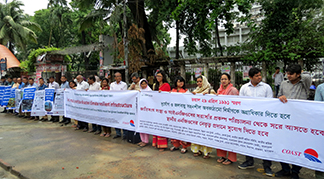 Mustafa Kamal Akand of COAST Trust moderated the human chain, while Shawkat Ali Tutul from the same organization read out the position paper and the demands. Among others Abdul Kader Hazari of ARPAN, Subal Sarker of Bangladesh Bhumihin Samity, Zayed Iqbal Khan of Bangladesh Krishak Federation, Tajul Islam of Disaster Forum and Laila Kabir of BDPC also spoke at the occasion.

Shawkat Ali Tutul said, last 27 years after the devastating cyclone 1991 there was a little initiative from the government to construct disaster and climate resilient infrastructures in Bangladesh. But government emphasised metro rail, electricity power generation, bridges, flyovers, four-lane roads, multi-storeyed building, and expressways like mega project. This is true that a country like Bangladesh needed for such growth oriented development but disaster and climate-tolerant infrastructures should get the first priority otherwise coastal and disaster prone population will leave their own inhabitant and create extra over burden in the big city like Chattogram and Dhaka.

Abdul Kader Hajari said, every year, the tidal and floodwater inundates hundreds of acres of land in the island, coastal land with saline water. Coastal people are facing the challenges with their own capabilities. He demanded to increase government support in the livelihood activities of the people of these Chars and coastal people.

Zayed Iqbal Khan said, even after 27 years of the devastation, there have no visible initiatives on protection of the coastal people. They are still leaving in risk and in vulnerable condition. He demanded to prevent the intrusion of saline water to the coastal areas to save the agricultural through construction of permanent embankment in coastal belt.

Lila Kabir said, the ground water layer mostly of hilly areas and other parts of the country has deep down. Bangladesh will face severe water crisis in the future if there is no control of the underground water lifting and storing surface water is not increased. She also urged the government to allow more community radio in the chars and coastal areas so that the weather forecasting, news and cautionary signal is easily accessible to the people.

Tajul Islam said, due to stormy weather almost every year many fishing boats capsized and fishermen missing in the sea. But as there has no appropriate registration system for the boat and for the fishermen the victim families get no support from the government and even the boat owners ignore to recognize the victim fishermen. He asked the Government should ensure registration of the boat with the local authorities of Upazila adminstration.

Mustafa Kamal Akand in his closing speech asked the United Nations agencies and INGOs in Bangladesh to keep their commitment at WHS and Grand bargain. He requested UN and INGOs to keep off from direct operation rather provide space to local NGOs leadership.
Please download related paper [Bangla Press] [English Press] [Leaflet]
Photos