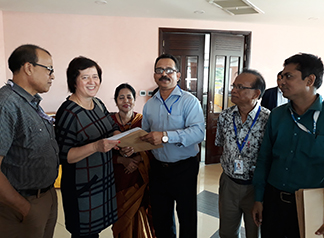 Cox’s Bazar, 29th April 2018. Today a delegation from Cox’s Bazar Civil Society and NGO Forum (CCNF) handed over a memorandum to the visiting United Nation Security Council (UNSC) delegation in Cox’s Bazar in a luncheon . On behalf of the UNSC delegation, the memorandum has been taken over by the Poland Representative to the UNSC Ms Joanna Wronecks . The copy has also handed over to all the luncheon meeting participants including State Minister for Foreign Affairs Mr Sharier Alam and UN Resident Coordinator Ms. Mea Seppo. The memorandum handed by a team of CCNF leaded by Co Chair Abu Morshed Chowdhury of PHALS, Bimol Chandra Sarkar of MUKTI, Moqbul Ahmed of COAST, Khaleda Akher of YPSA and Kazi Muid of SARPB.
The memorandum has contains six points demand from CCNF, these are
(1) Take resolution in UNSC to bring the Myanmar government’s people who are responsible for this “Ethnic Cleansing” in the International Court of Justice.
(2) Take resolution in UNSC to impose embargo on trade and arm business in Mayanmar.
(3) take all actions that Mayanmar government to ensure citizenship and thereby all related rights for Rohingyas as a first and foremost demand in all negotiations.
(4) Take all actions that Mayanmar government not to keep Rohingya refugees in IDP (Internally Displaced People) camp, they must be given the rights to live in their lands and must be compensated for the losses. There must be the presence of UN peace keeping forces.
(5) UN must prepare a “Environmental Recovery Fund” for Cox’s Bazar, as we the Cox’s Bazar population has already lost a remarkable level on our natural resources, i.e., water, forest etc. It should be noted that Cox’s Bazar population are very much depended in natural resources.
(6) UN agencies should follow their Grand Bargain commitment to minimize aid transaction cost and also to take effective participation of local people in Rohingya relief.
The six points demand have been discussed during the luncheon meeting where other high government officials, UN officials were also in presence.
Please download press release [Bangla Press] [English Press] [Memorandum to UNSC by CCNF In Cox’s Bazar]