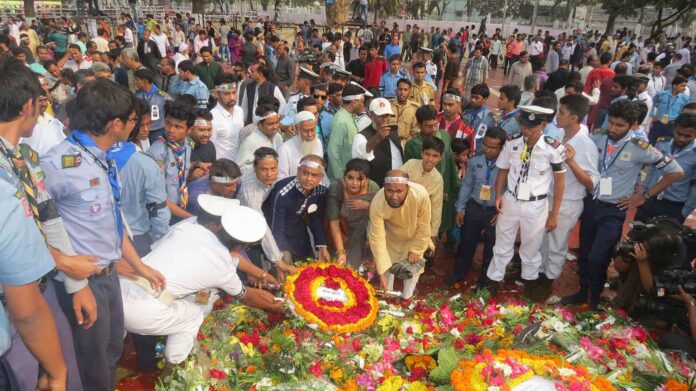 21 February 2017. COAST pays its homage to the language heroes of Bangladesh with great respects and commitment of establishing an equity based democratic society. COAST believes that the spirit behind the sacrifice of the language heroes is to create a society or country with equity and justice. Those heroes strives for true democracy where people would enjoy empowerment, freedom of expression, participation in decision making, participation in development process.

COAST always observes the International Mother Language Day on 21st February with a theme or message. For this year, the theme was “Our Commitment is to Establish Equity Based Democratic Society.” EquityBD paid its homages to the language heroes which was followed by a discussion on the spirit of the day. The key topics of the discussion were democracy, social harmony, secularism, liberalism, people’s empowerment. COAST takes this opportunity to promote the spirit of social, political and religious harmony among its staff, program participants and stakeholders.

International Mother Language Day is a worldwide annual observance held on 21 February to promote awareness of linguistic and cultural diversity and multilingualism. It was first announced by UNESCO on 17 November 1999. The date corresponds to the day in 1952 when students from the University of Dhaka, Jagannath College and Dhaka Medical College, while demonstrating for the recognition of Bengali as one of the two national languages of East Pakistan, were brutally shot dead by police (then under Pakistan government) near the Dhaka High Court in the capital of present-day Bangladesh.

The Language movement of 1952 is recognized as the seeds of liberation war which helped us to achieve the much-desired independence of Bangladesh from its Pakistani rulers. Last Edited 20 March 2017