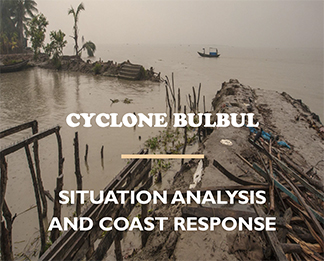 Because of the impact of climate change, the world is facing frequent natural disasters in different forms. Bangladesh is amid the topper position of the most vulnerable countries in the world. During the period of 1978-2019, a total of approximately 133 tropical cyclones formed in the Bay of Bengal. According to the current Statistics, an average of 1.15 tropical cyclones hit Bangladesh per year. Currently we are facing another the very severe cyclone storm named Bulbul where the international name of it is Matmo. Actually Bulbul is the reborn form of it and the rare overland passage by this cyclone brings a threat to India and Bangladesh, since it originated from the remnant of a Western Pacific tropical storm in the South China Sea in late October of 2019. The cyclone lost strength and entered Bangladesh through the Sundarbans in Khulna around midnight of Sunday (10.11.2019), after making landfall at Sagardwip in the southern part of India’s West Bengal. Because of this very severe storm, the coastal districts have started experiencing heavy rainfall and stormy wind since 10 November, 2019 morning under the impact of the cyclonic storm Bulbul as it was crossing the coastline of Bangladesh. Details report click here