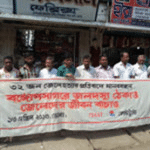 1st week of April sets afloat 32 corps of fishermen in the Bay of Bengal and waves the entire fishing community in Bangladesh to mourn and agitate. They build up a human chain on the street in Bhola and Cox’s Bazar on Saturday, 13th April 2013 and demand for a safe fishing

which is contributing a large stake in the country’s economy.

The Bay of Bengal is no more a secured fishing zone as the fishing boats are being looted every now and then and men are being killed if ransoms are not delivered duly.If the poor fishermen had any other options they would have left fishing forever in this situation. Dead bodies have been being afloat for years and nobody is accused, nor is anyone arrested.

In separate human chain on the street in Bhola and Cox’s Bazar organized by COAST Trust and participated by the fishermen, students and civil society representatives. Different cooperative societies of the small scale fishing entrepreneurs and fishermen also took part in the event in both place.

The stand up in human chains were held for half an hour and several demands were announced. The major demands were:

· All the fishermen should be registered and have to have an ID card to be traced;

· All the fishing boat should have a registration number and Upazila Council should be the authority;

· Coast Guard or Navy should patrol the coastal fishing zone and ensure security at least during April to August;

· Camps of coastal security agencies should be established in the small islands;

· Combing operation by the security force should be held in the islands to arrest the pirates as soon as possible.

Click here for the position paper in Bangla, Press Release from Bhola and Coxs Bazar