Home event Quick Response to Cyclone Amphan was the Key to Minimize Loss and... 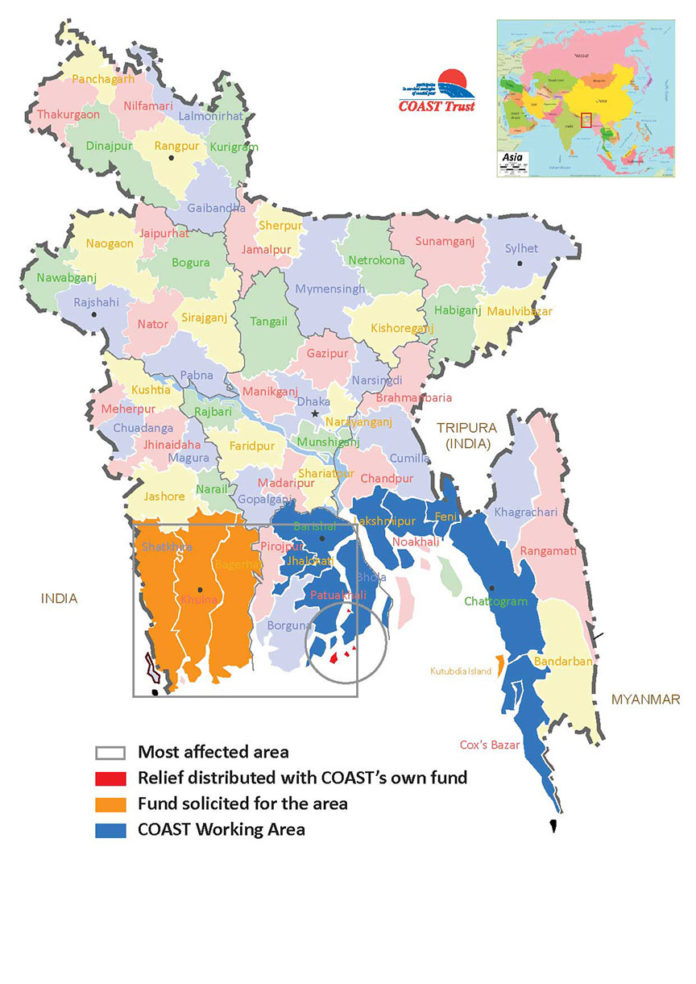 As a local organization, COAST always has been the first and fast responder to any disaster effects the people in its working area. Since its emergence, COAST always have had an emergency fund to create some preparedness before any disaster and to respond to the affected people in post-disaster period. This is one of the mandate of the organization as the coastal area of Bangladesh is always exposed to devastating cyclones and other disasters.

The preparedness of the organization to face the Cyclone Amphan, one of the strongest cyclones in the last couple of decades, were as follows:

1. Coordination meeting of the emergency teams across the 9 coastal districts on 18,19 and 20 May;
2. Prepared spokesperson from the community and organization- Ms. Rashida Begum in Bhola, Ms Konika Rani of Radio Meghna, Ms. Suparna Barua in Cox’s Bazar and Ms. Sumaia Mariam in Central level;
3. Cyclone tracking and 24 hour preparedness message dissemination by the Radio Meghna until the cyclone landfall;
4. Arrangement of cash for the post disaster response if Banking is not available;
5. Prepared water purifying machines, power pumps for drinking water after cyclone, megaphones are bought and distributed to all branch offices, necessary fuel were preserved for operation;
6. Assistance to the CPP volunteers in the remote chars for warning and evacuation;
7. All vehicles made ready with fuel for relief transport where needed;
8. Two rescue boats were ready in Char Kacchapia in Bhola and Moghnama ghat in Cox’s Bazar.
9. Warehouses were prepared for stocking the relief goods.
10. Youtube video is made on the critical issues of the cyclone (link here). The predictions came true later.

Loss and Damage so far
The center of the Cyclone Amphan pierced through India, however it left a huge impact in the coastal area of Bangladesh including high tidal surge affected by the moon. Small islands like Kutubdia in Cox’s Bazar, Dhalchar, Char Kukri Mukri, Char Patila and others in Bhola are almost submerged. The most affected districts of Bangladesh are Satkhira, Khulna and Bagerhat where it is seen that the people physically fought the cyclone to protect their lives and crops. The entire community broke into protecting and repairing the embankment even on the Eid Day and they made their Eid Prayer on the tidal water.

COAST response with own fund
Emergency relief from the government and other agencies hardly could reach the small and far islands in the Bay of Bengal where poor people were severely affected. COAST managed boats to reach Dhalchar, Char Kukri Mukri, Char Shahjalal and Char Patila under Bhola district right before Eid Day with relief for severely affected people. Emergency food item and soap are distributed to 270 poor families in those locations. All of these islands are located in the Bay of Bengal and being far from the main land they are always ignored for relief operation

Fund received so far
COAST along with other partners (a consortium) submitted for emergency relief to START Fund which is granted for Bhola island.

Photos and videos of Monpura/ Bhola