Home event The best use of the available fund must be ensured in Cox’s... 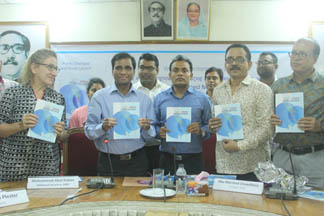 Cox’s Bazar, 19 August 2018: Today a multi-stakeholder dialogue took place at the conference room of the Deputy Commissioner’s Office of Cox’s Bazar to observe the World Humanitarian Day 2018. It is urged that the ‘Whole-of-society Approach’ should be taken to maximize the combined efforts in Rohingya response.
The dialogue titled ‘Dignity for Forcibly Displaced Myanmar Nationals (FDMN) and ‘Whole-of-Society’ Approach’ is jointly organized by COAST Trust and CCNF (Cox’s Bazar CSO NGO Forum) where Mr. Muhammad Abul Kalam, ndc, RRRC was present as the Chief guest and chaired by Mr. Quazi Abdur Rahman, Additional Deputy Commissioner (Revenue). Mr. Abu Murshed Chowdhury, the co-chair of CCNF moderated the session and Barkat Ullah Maruf, Assistant Director of COAST Trust presented the keynote paper. The panel speakers were Ms. Elisabeth Pelster of UNHCR, Ms. Margo Baars of ISCG, Dominica Arseniuk of NGO Platform, Bimal Chandra Dey Sarkar of Mukti Cox’s Bazar and Didarul Alam Rashed of Nongor.
In the beginning of the dialogue, the participants remembered Mr. Kofi Annan, the former Secretary General of UN and expressed condolence for his departed soul.
The chief guest of the dialogue Mr. Mohammad Abul Kalam officially launch the study book titled ‘Crisis within the Crisis”. In his speech he said, I have been informed about this study from the beginning and I appreciate CCNF and COAST Trust to carry this out. This is really important document to guide the Rohingya Refugee response including the host community.
Abu Murshed Chowdhury of CCNF said while moderating the session, we lost one of our dedicated humanitarian worker, Ms. Rozina Begum who used to work with Mukti Cox’s Bazar. She died in a road accident while going to the duty and we should compensate her family for this loss.
Barkat Ullah Maruf of COAST Trust said while presenting the keynote paper, this study covered 5 major areas of the impacts on the host community due to the Rohingya influx. The findings include the rapid deforestation due to the burning of firewood of 2,250 tons daily. Which might eat up the entire forest of Ukhiya by 2019. The livelihood of the poor local people reduced to half of the previous but living cost is increased by double. He also said, we must introduce the ‘Whole-of-Society Approach’ to maximize the efforts to deal with the refugee crisis because this approach emphasizes the comparative advantages of the stakeholders instead of traditional mandates of work.
Ms. Elisabeth Pelster of UNHCR said in her speech that, it is time to highlight the positive impacts of the crisis and one of them is more jobs and more wages are created by which the local people are massively benefited.
Quazi Abdur Rahman, the ADC of Cox’s Bazar said, I do agree that jobs are created. But we have to admit that the additional population is beyond our capacity and that is hugely affecting the district. The DC office hardly are able to provide the general services to the people. Even achieving SDG for Bangladesh is going to be hampered. He also said, we might not receive the total expected fund of JRP. But we must ensure the best value of whatever we have. We must not misuse it by serving ourselves including our salary and benefits.
Ms. Margo Baars of ISCG said in her speech that, there are some measures already taken to address the issue including distributing alternative fuel for cooking to save the deforestation both in refugee and host community. She also said, we have good plans but the challenge is the limited fund. Only 33% of the JRP is received so far.
Dominica Arseniuk of NGO Platform said in her speech that there should be dialogue among the NGOs both the national and international agencies who are involved in the humanitarian response. Strong partnership can reduce the duplication and humanitarian response could be more effective.
Didarul Alam Rashed of Nongor said, we have heard about the Grand Bargain and Charter for Change (C4C) and we also have heard that all the principles would be incorporated in the humanitarian response here. But still we don’t see any reflection.
Bimal Chandra Dey Sarkar of Mukti Cox’s Bazar said in his speech, we have seen that UNHCR and IOM and other international organizations have circulated EOI (Expression of Interest) to submit projects on host community. We hope this will be useful for the host community.